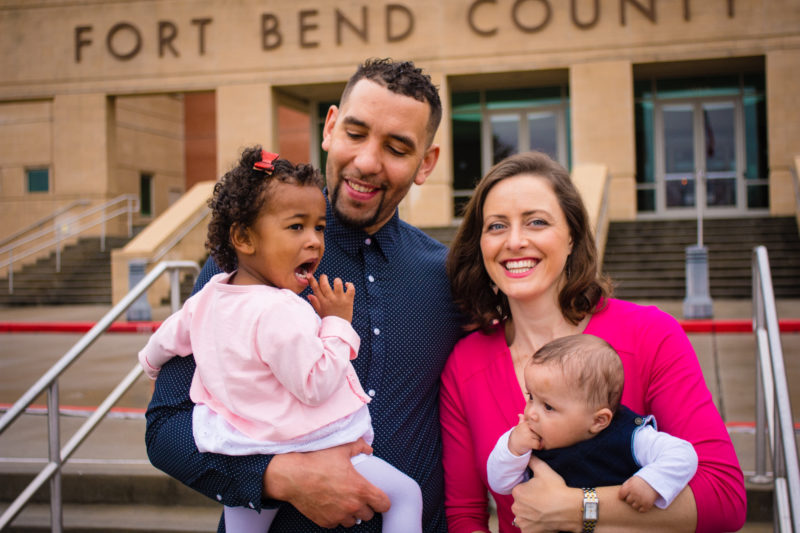 First, can you believe how little our littles were at Noah’s adoption day? Nothing like a photo of two kids with their hands in their mouths. Ha!

Second, it’s National Adoption Month in the States in November, and I wrote about failed adoptive matches for ParentMap. In the span of a year between adopting our Maya and finally finding our Noah, we had two failed infant adoptions fall through, and we had two foster-adoption situations fall apart. I’d love for you to read that article, and then read this back story. And bear with me, because it starts as a downer, but I hope it’s reassuring in the end to people who reticent to consider adoption because they fear a failed match.

I think a failed match or a failed adoptive situation is one of the biggest fears people have when they consider or think about adoption. I actually didn’t consider it happening until we started our search for Maya’s little sibling, because Maya came so quickly and her situation meant that she was all but legally ours from the minute we laid eyes on her. But when we were matched with an expectant mother when Maya was six months old, there was a really intense period of wondering whether it would actually come to be. And then we did that same wondering and waiting that melted my brain three more times before we got to Noah.

I can only speak for myself, but we didn’t name that first potentially-ours baby — in fact, we couldn’t decide on a name for that baby, which I now believe was because he wasn’t meant to be ours; the only baby we have ever been able to name before he arrived was Noah. But we did call that first failed match baby ‘Little Man,’ for the whole time we waited for him. Our whole family called him that. We packed a hospital bag for him with tiny newborn clothes and snacks for us and it sat in the living room for weeks; the expectant mother had cut off communication shortly before her due date and no one could find her until about ten days later. And even then, it was only by the grace of God that we found out that she and the baby were safe and supported in a mother-and-baby home, and that she had decided to parent her son.

Maya was napping in her room as I sat on our bed and got the call from our agency. It was our first true heartbreak in our adoption process, a fact for which I will always be incredibly grateful. A failed match is hard to process; Michael and I kept saying to each other, “This is what you want, you want a mom and son to be together.” And yet we had to grieve the loss of a member of our family we imagined and planned for and would never meet. (Of course, we did end up meeting Little Man seven months later — and again thought we would be able to adopt him, and again were heartbroken when that decision changed.) Your head knows it’s the right thing (if it’s safe for everyone involved, which it isn’t always and wasn’t in Little Man’s case, but luckily we didn’t know that at the time), but your heart is broken for what never was.

That day when our hearts were feeling bruised and sad, we decided that the best thing to do would be to go get margaritas a few blocks from our house. It was April and hot out already and Maya was wearing a sundress my mom had made her. We laughed and cried and processed and grieved — and thank God for strong margaritas in a case like that!

My editor, Vicky, asked me if I could sum up what it feels like to have a failed match and I’ve been thinking about that ever since. I had to find a way to express it a little more succinctly for the purpose of the ParentMap article, but if I’d had more room I would have tried to explain this: a failed match feels like your heart has dropped out of your body. It feels like the worst thing that could have happened did happen. But counterintuitively, there’s a huge strength to be found in surviving what you think is the worst thing that could happen. I didn’t think I was strong enough to cope with the sadness of not holding a baby I envisioned for weeks, but I am, and I’m grateful for that silver lining.

I’d also explain that a failed match feels very different with time. In retrospect, we know that the children who didn’t end up with us weren’t meant to be our children. We hope we played a role in their lives through fostering them, or maybe we played a role in their moms’ lives, giving them a plan that gave them a modicum of peace in a crisis, but they weren’t meant to join our family forever. Failed matches, in the months afterward, feel more like a missed connection than a loss.

The hardest thing about experiencing a failed match was trying to hold onto hope in future adoptive situations. But as I mentioned in the article, we owed it to whoever was going to be our child in the months or years to come to hold onto hope that he was out there. We owed it to Noah to be able to tell him that we were so excited about his arrival — not that we were so fearful of it falling through that we didn’t give ourselves the opportunity to dream of his little self.

It was a rollercoaster eight months of Little Man, then Baby J, then Little Man again, then another failed infant situation that fell apart on New Year’s Eve. I think we were fueled entirely by adrenaline and tacos (and let’s be honest, a few margaritas). But I’m so glad we were able to continue to hope with every situation that whoever was meant to make us a family of four would find us, and in the meantime, we would just keep saying yes without fear of our own sadness.

If you’re considering adoption or are even just interested in the ins and outs, I hope maybe this elucidates what a failed match is like. It’s crummy and sad, but it’s survivable, and certainly not a reason to avoid adoption altogether. And the ability to hope in the face of potential heartbreak is a gift I never knew I needed. Xx