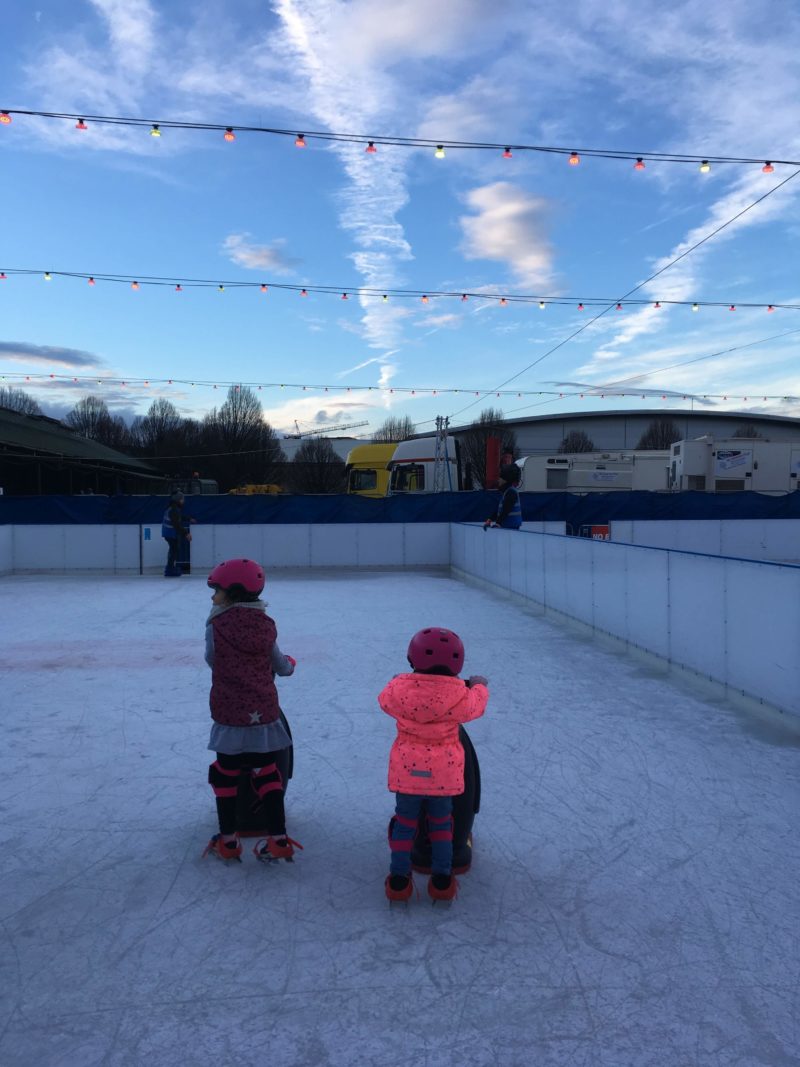 Yesterday, we went ice skating in Dublin. The ice was soft and the skates were dull, but the rink was deserted and the Christmas lights were so festive and we had a very enjoyable afternoon. Maya and I went with my sister-in-law, Angie, and her older daughter Eabha, my first niece. The girls were so excited to take the train over to the RDS and meet Angie when she was finished with school.

The tickets were actually free from a friend of the family, and honestly, I probably wouldn’t have gone initially (especially with a 3-year-old) if they hadn’t been. But it was enjoyable enough that I’ll probably shell out the €25 for the two of us every year as a pre-Christmas tradition! There aren’t that many opportunities to skate (and apparently this is the only open air rink in Dublin the rest are also temporary but covered in large tents) in Dublin, and I’m happy to be able to share a winter activity that I spent so much time doing when I was growing up in Maine. Skating on China Lake every year did make me very snobby about ice and skates, but we’ll take what we can get in our slightly milder climate. 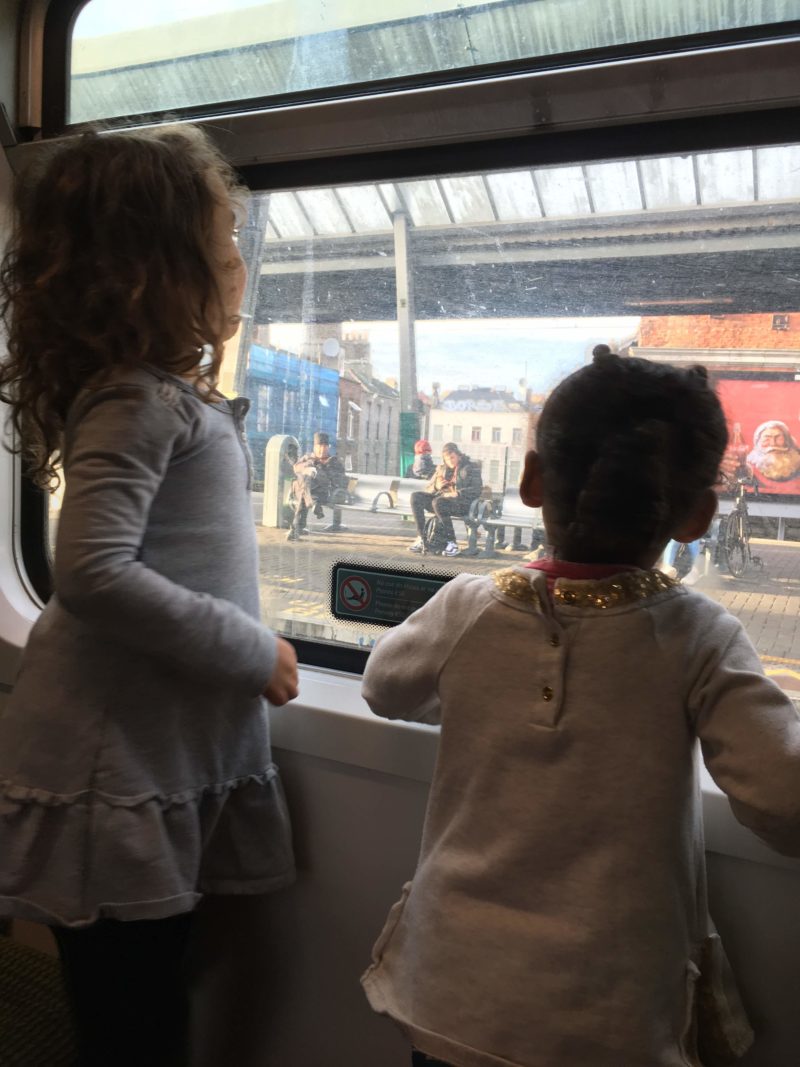 I think the key to most of the success of the afternoon was the timing. We arrived right at 3pm, which meant we missed the school groups that would have come during the school day, but we were earlier than any after school or evening people. The fact that it was a random Wednesday didn’t hurt, either. But the rink was so quiet. There’s a kids rink and that only had two other people for the first 20 minutes we were there, and the rest of the time we had it to ourselves! 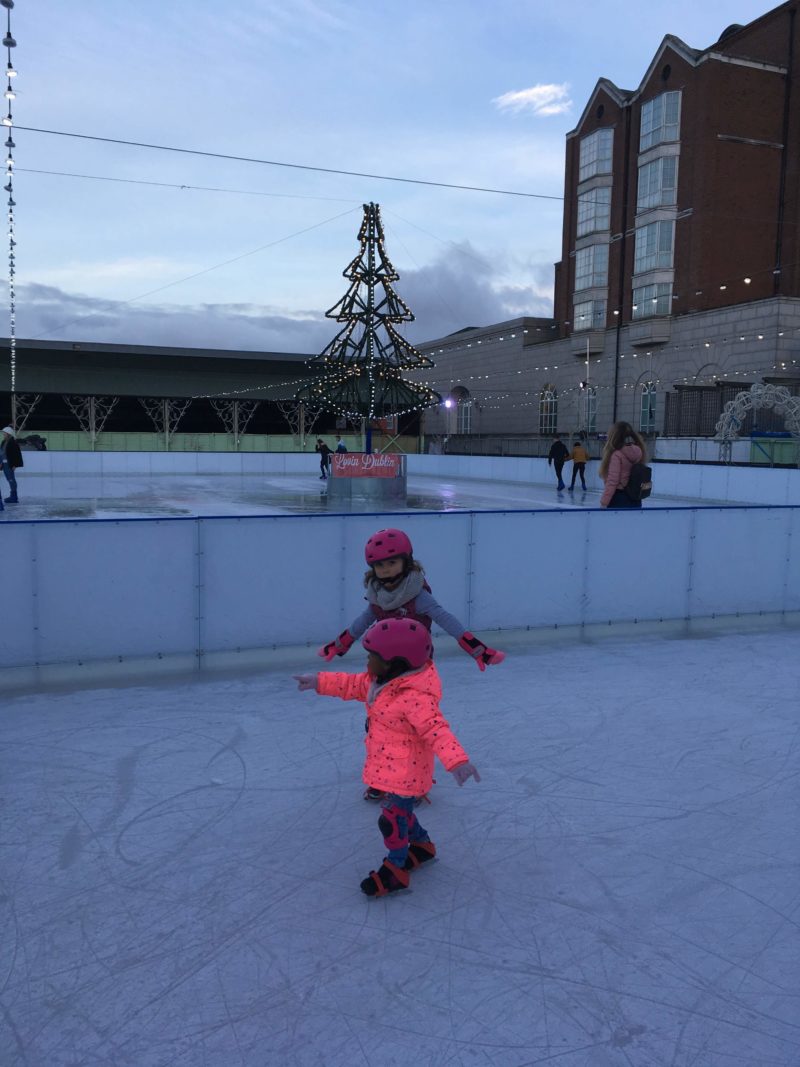 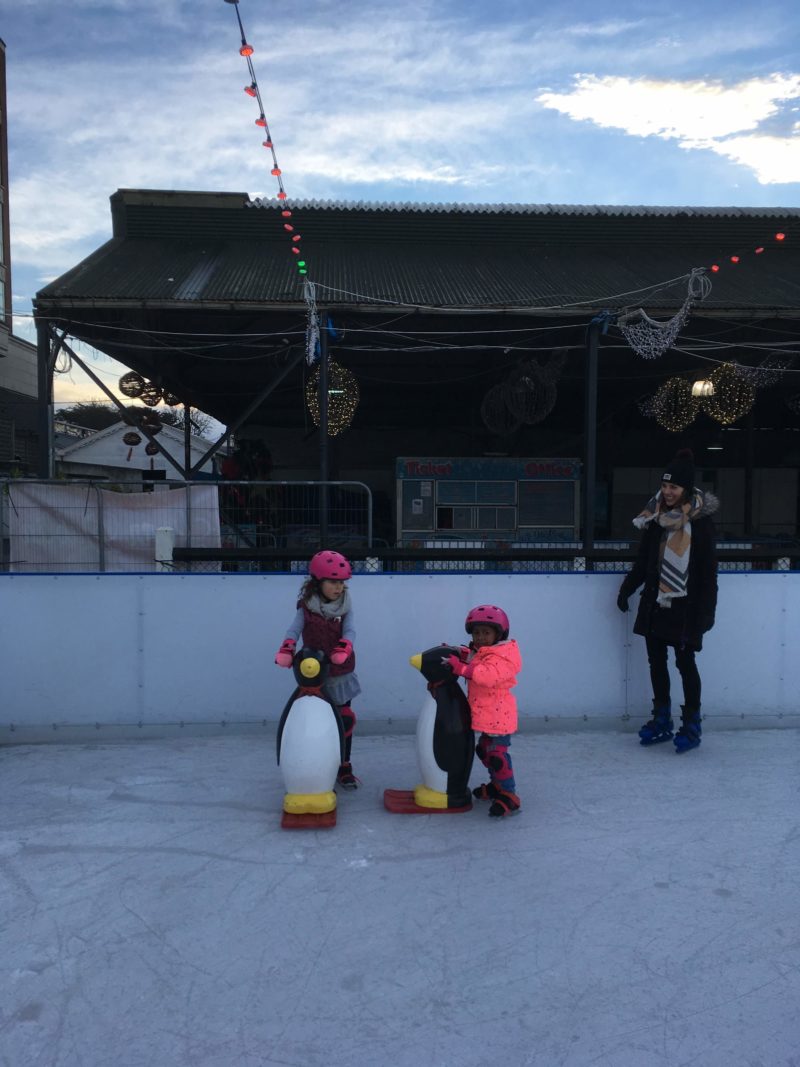 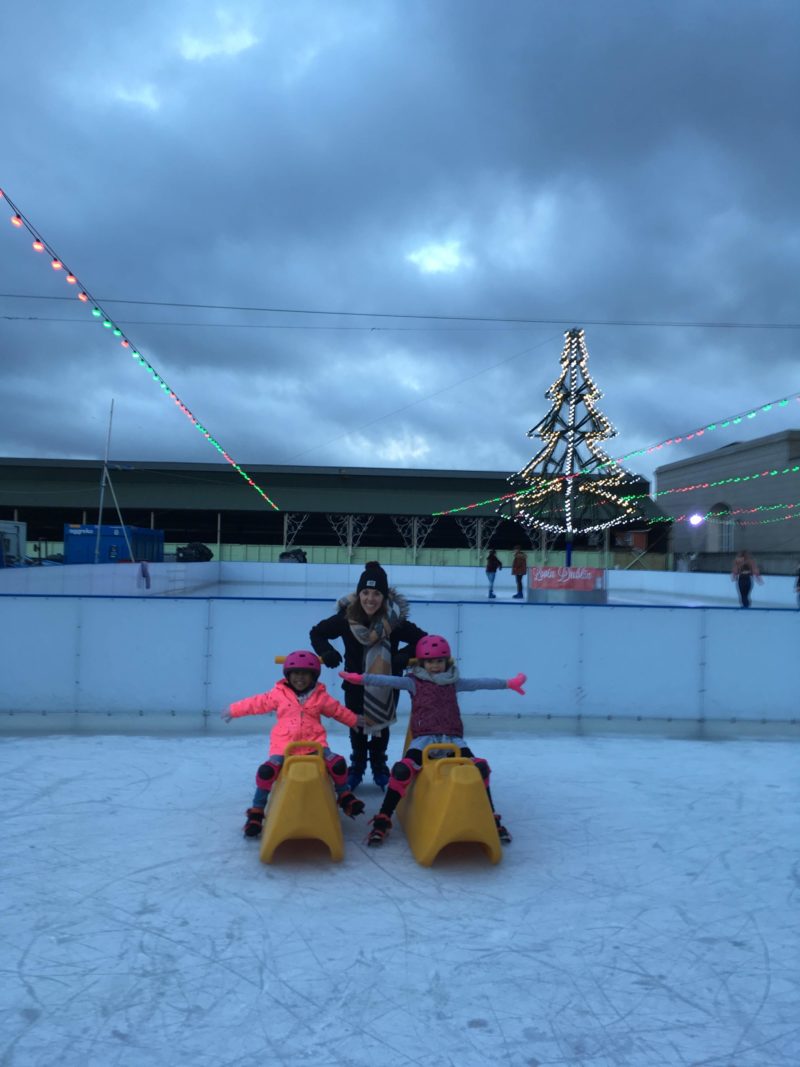 I will also give full points to the iSkate place for providing helmets and knee, elbow and wrist guards for the kids free of charge. With the double runner skates, they didn’t exactly get up enough speed to make any dramatic falls (you couldn’t even really call it skating), but it was a nice option and Maya was obsessed with the pink “elmet.”

They had little penguins the kids could push as they found their feet, and they had these yellow banana sleds you could push them on. Both kids did more riding than skating, but it was a good workout for the grown ups! 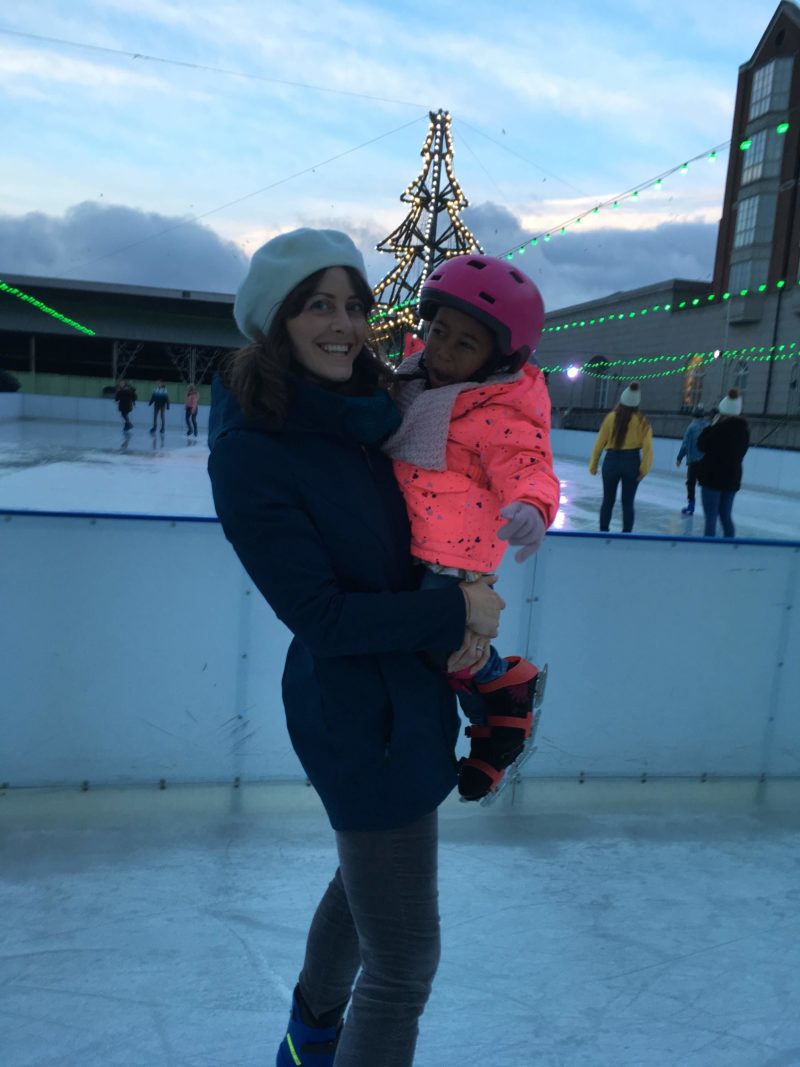 A little while after we arrived, the Christmas lights strung above the rink turned on and both Maya and I were pretty obsessed with the festive vibe. 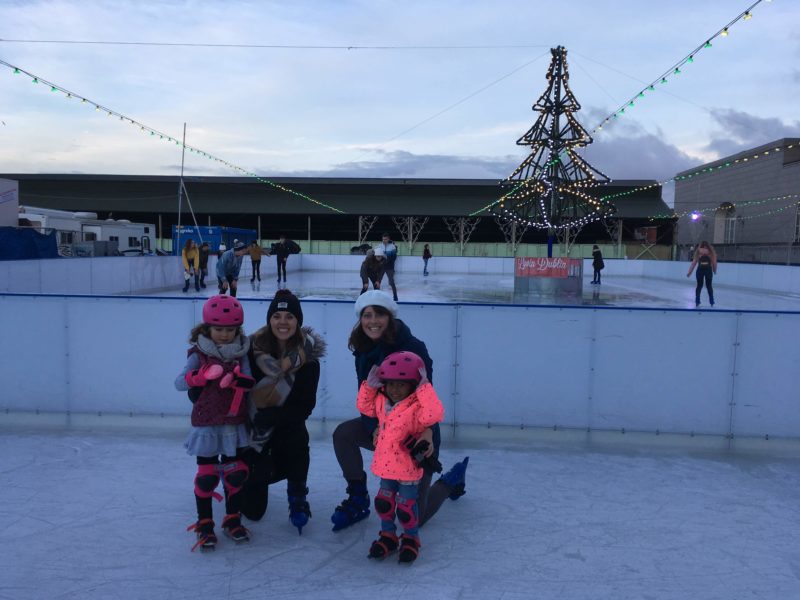 I hope you have enjoyed these dark and grainy photos from my very ancient iPhone! Well worth documenting, however poor the quality!

If you’re in Dublin, there are rinks dotted around the city over the holidays, but the one we went to was called iSkate at the RDS.