Our Dublin Home: Before Photos 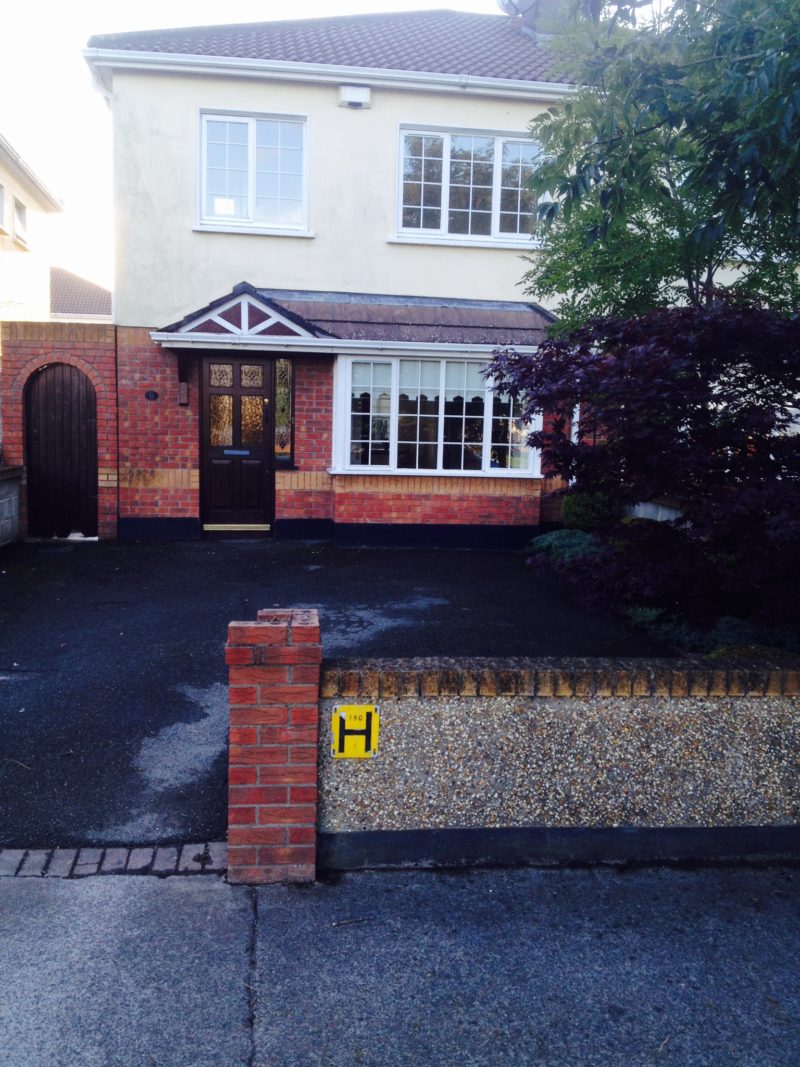 We’ve officially been back in Dublin for 3 months and one week. Honestly, it feels like much, much longer. And not because it’s all been hard (although I won’t be signing up for an international move in again in the near future, did I mention that before), but because we’ve done so much.

The biggest transformation has been our Dublin home. To catch you up, we bought our house in Dublin as we were moving to Houston in 2015. We knew it would be just about the only time we could make it happen since Ireland has a requirement that if you work for yourself, you have to show two years of accounts. If we didn’t buy a house then, we would have had to rent for another two years once we got back to Dublin, and we knew the rental prices were going to be completely unaffordable for us. We weren’t wrong, they’re outrageous.

So we bought the house and then rented it. Michael’s mom (thank you Lois!) took care of the house and dealt with our renters, which was a huge job. We are so appreciate that we were able to cover our mortgage and have a little bit of income from the property while we were gone.

If we’d moved into the house right away, we probably wouldn’t have done much to it. It was livable as it was, and we would have lived with it for a few years and then done a lot of what we have done in the last few months. But in our last year in Houston, we were able to save some money in Ireland from my freelance work over here and when we got back, we made some changes that we are so, so grateful to have been able to make happen. Because after three years of tenants, it was looking pretty shabby. The surfaces weren’t nice enough to withstand more than a year or two of wear, from us or anyone else.

I want to share with you all of those changes (although if you follow me on Instagram stories, you’ve probably seen the guts of the work we’ve done) and share after photos, but first I figured I’d share the before version. We bought a fairly standard Dublin suburban semi-detached house. It’s attached to another house on one side, so in America we’d just call it a duplex. Just imagine that every other house in the neighborhood are all duplexes that look very, very similar. There are also row houses that are attached on both sides to other homes, and then detached homes, which are generally fancier. It’s a luxury not to share a wall with neighbors, apparently, although it doesn’t bother us in the least after living in apartments for the last 10 years. Maybe more like 15 when you count college dorm life.

So we bought this house. We looked at it for all of 7 minutes at the viewing and then put in an offer. Until we returned from Houston, I hadn’t seen the inside of it since. Most of the time, it felt like we didn’t even own the house, because the rent paid the mortgage and we didn’t have to think too much about it (thanks again, Lois!). But what a luxury it is to have this house in a housing market that’s in total crisis. We know how lucky we are to have been able to buy it when we did!

Michael and I made some plans when we were in Houston so that we could hit the ground running when we got back to Dublin. We had a Pinterest board and started to hone in on what we both knew we liked, and we started looking at our budget and made goals about what we could afford to change. Thankfully, we were able to change even more than we planned.

The day after we got back to Dublin, Michael met with our builder, Julian, to go over the plan, and Julian started the very next day. Michael worked alongside him, mostly doing the demo to make the job go faster. They took out all the flooring and the entire kitchen, and widened a wall. We hired a painter to paint the inside, and later the outside, and someone to do the tile in the kitchen. We still have jobs we’d like to do in the future, like build a staircase to the finished attic or gut the upstairs bathroom, but for the most part, it’s basically brand new from top to bottom.

It’s not huge, in fact, we aren’t sure we gained all that much more square footage on our teeny Houston apartment. But the layout is so good and the light streams in even on the darker days. And we have an upstairs, which is a total gift after our Houston apartment, where we were 10 feet from the kids beds while we sat in the living room and watched TV at night. We never needed to share a room with them, because we could hear them breathing in the next room at all times!

All that to say, we are so grateful to be here in our new home. I can’t wait to share some of the after photos very soon, including a few collaborations about which I’m so excited.

But first, the before photos. And keep in mind, the flooring was the cheapest of laminate, the kind that’s essentially a photo stuck on top of disintegrating MDF. So bad. The carpet upstairs was such bad quality that even though it was new when we bought the house, it was disgusting by the time we moved back. And we had the loveliest of renters in those three years — none of the wear was down to bad renters. It was all just poor quality.

So, the entryway and the exterior. We were the sad house on the block that really needed a paint job. And the brown front door was just so drab. 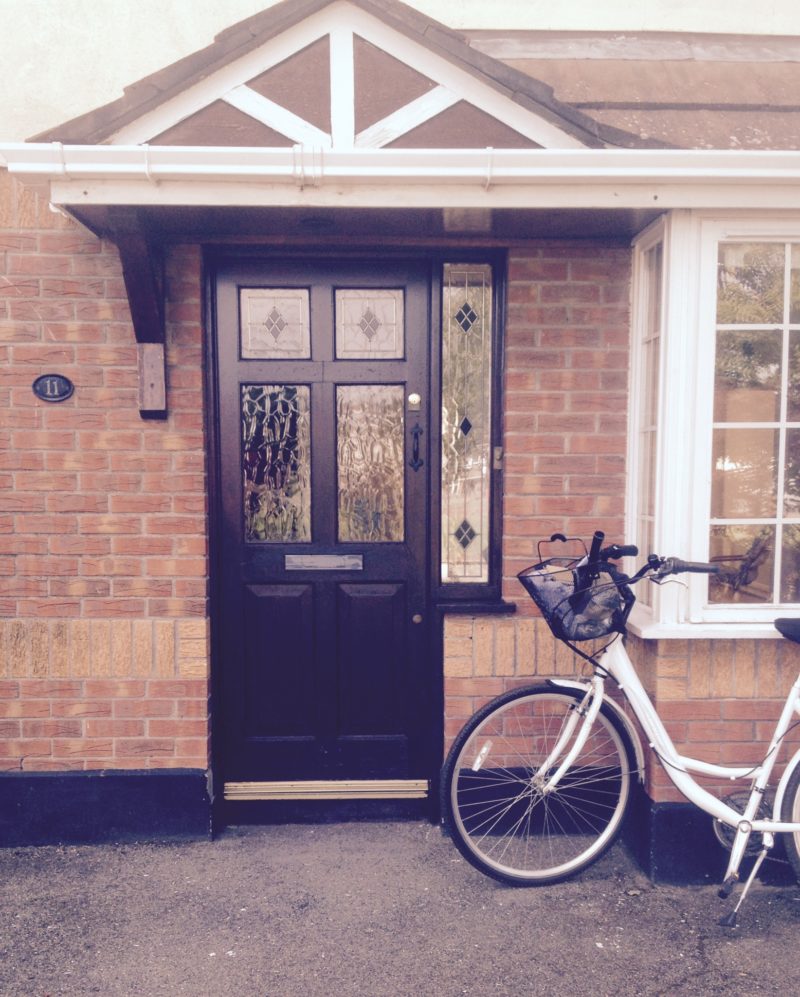 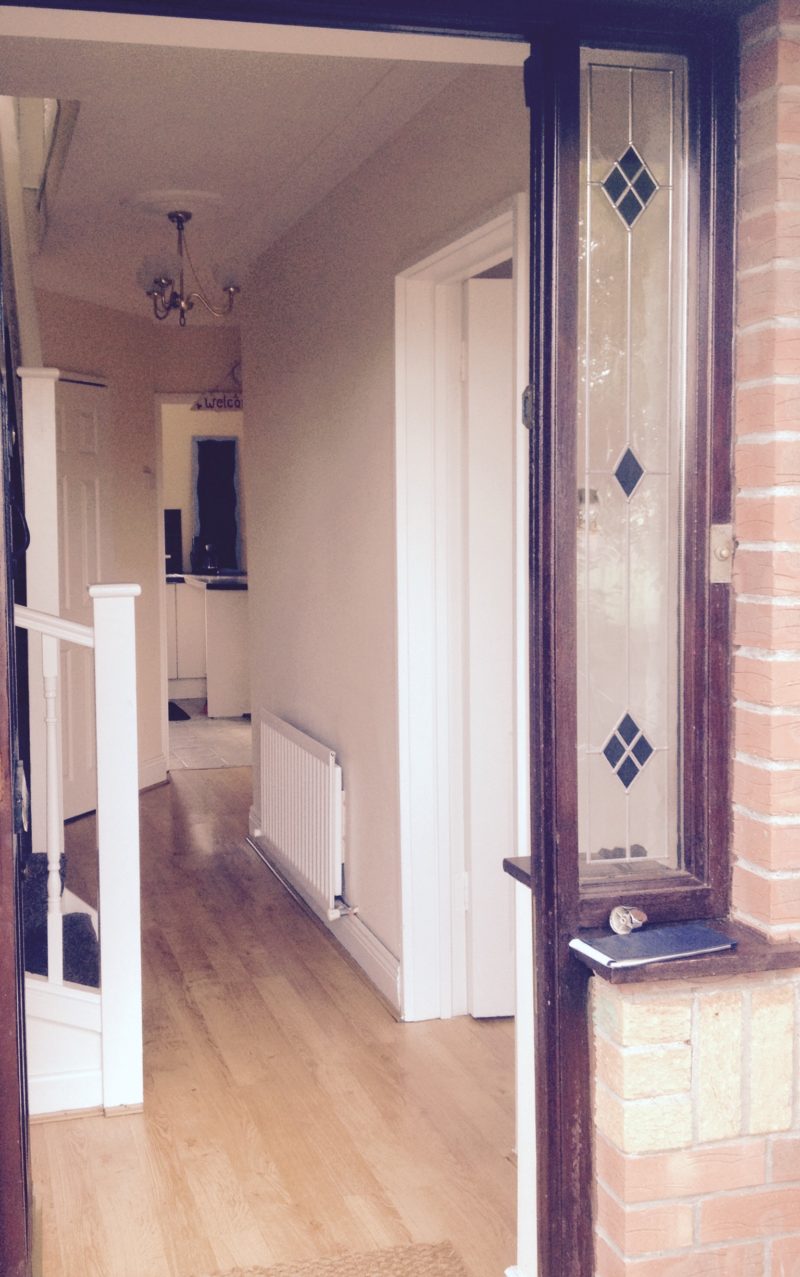 Ooh, terrible light fixtures. I’m so glad those are gone! 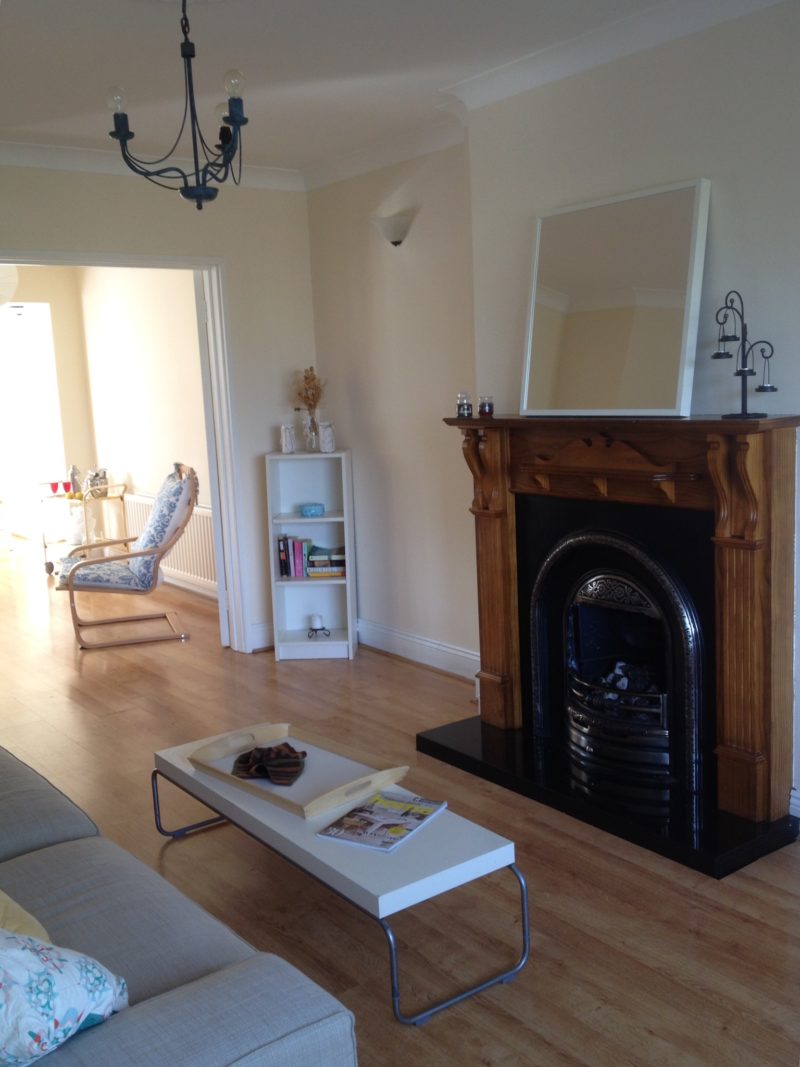 This is the living room, which is long and narrow and totally taken over by that monstrosity of a fireplace. 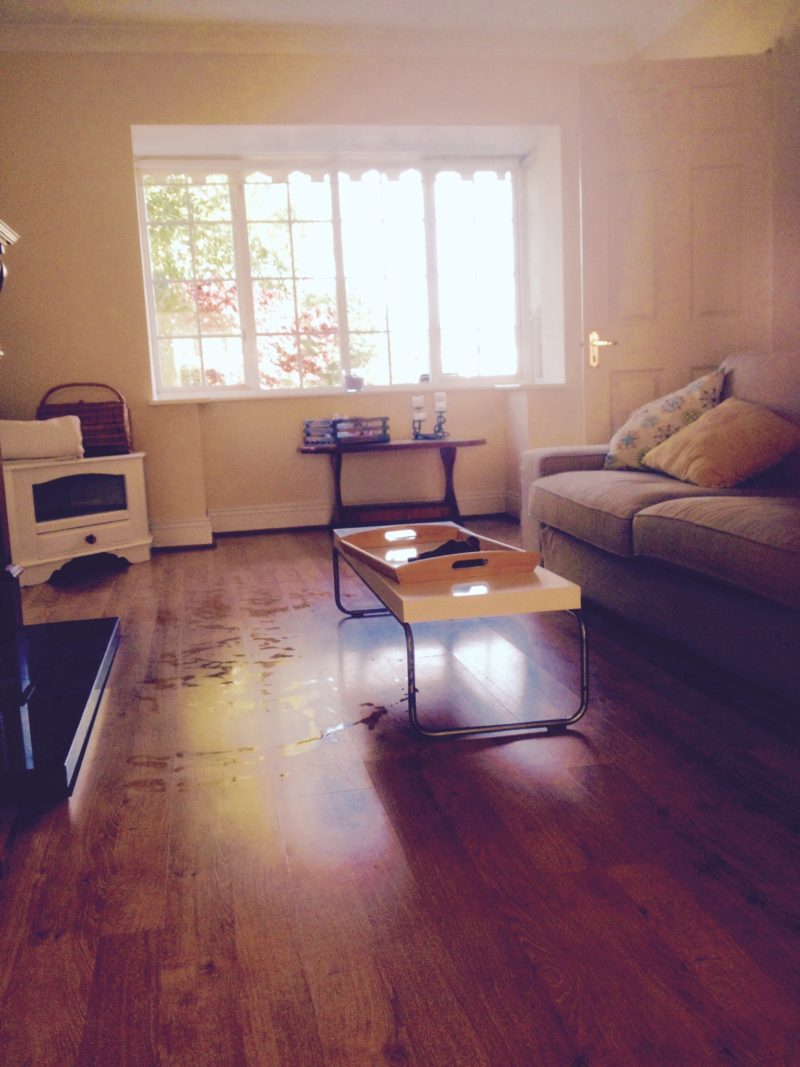 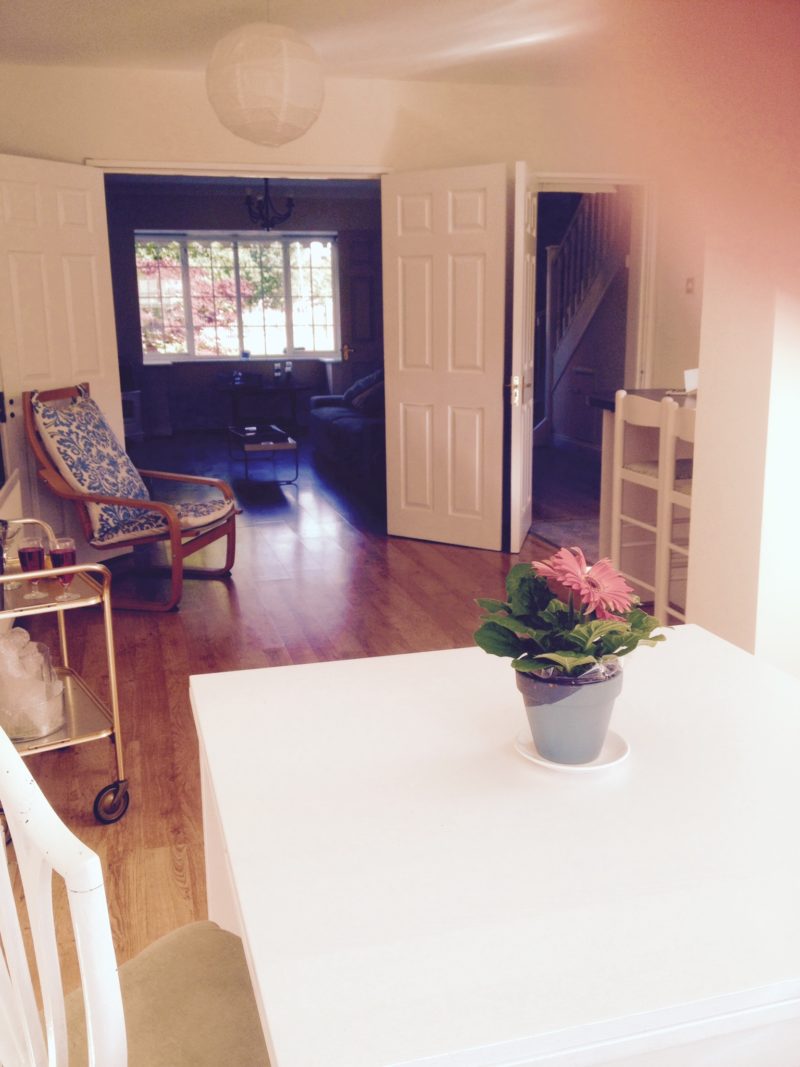 These photos are from when my mother-in-law was getting the house ready to rent. She made the most of the house for sure! (Thank you Lois!) 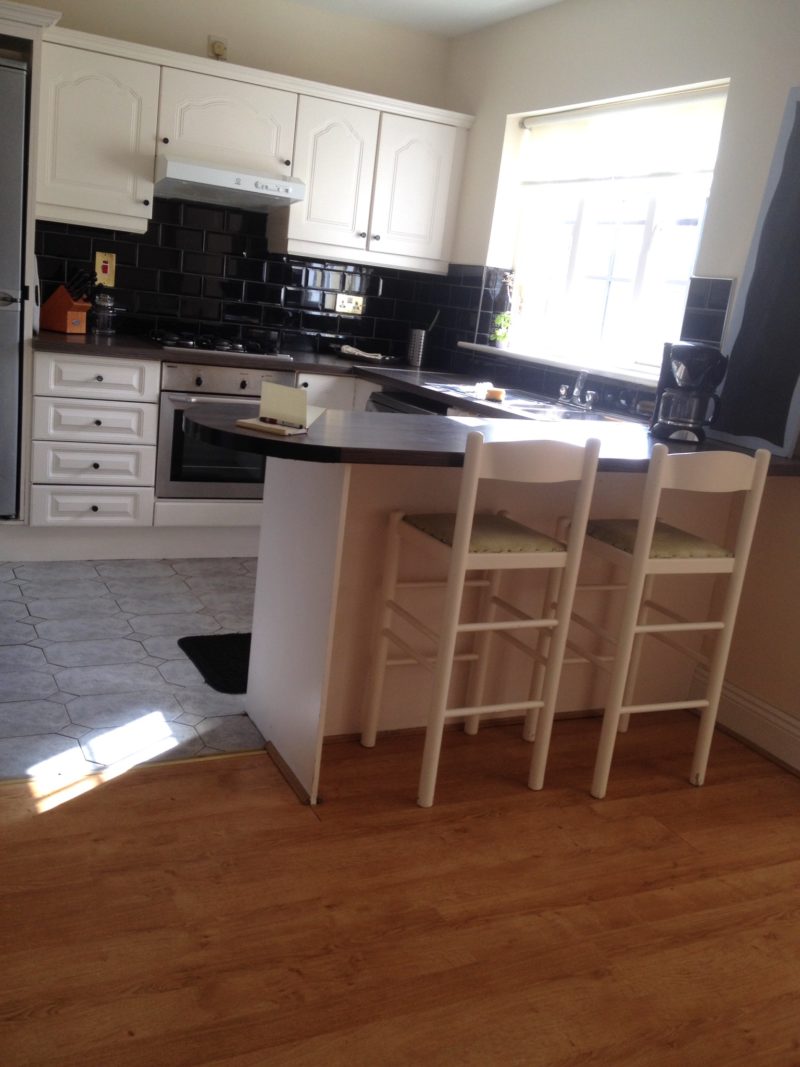 Oh man, I can’t wait to show you what we’ve done to the kitchen. It’s SO much better. The cabinets were essentially falling apart by the time we returned, so although we didn’t plan on a full kitchen gut, that’s what we ended up doing and I’m thrilled. 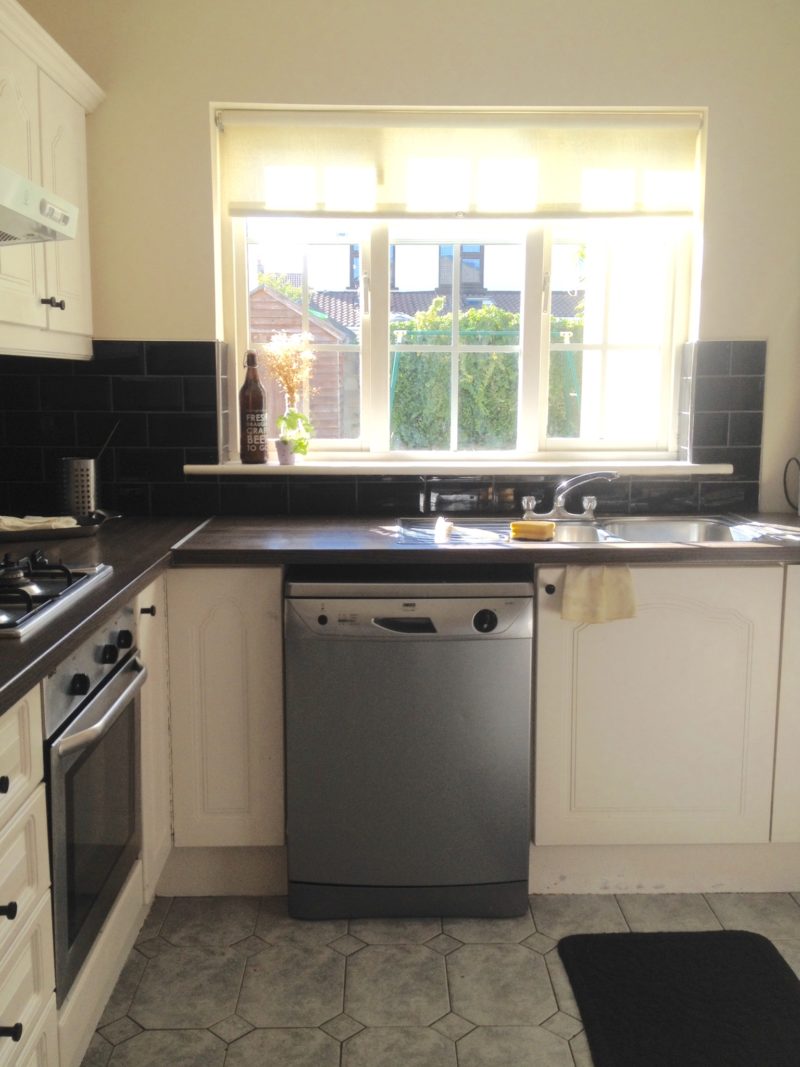 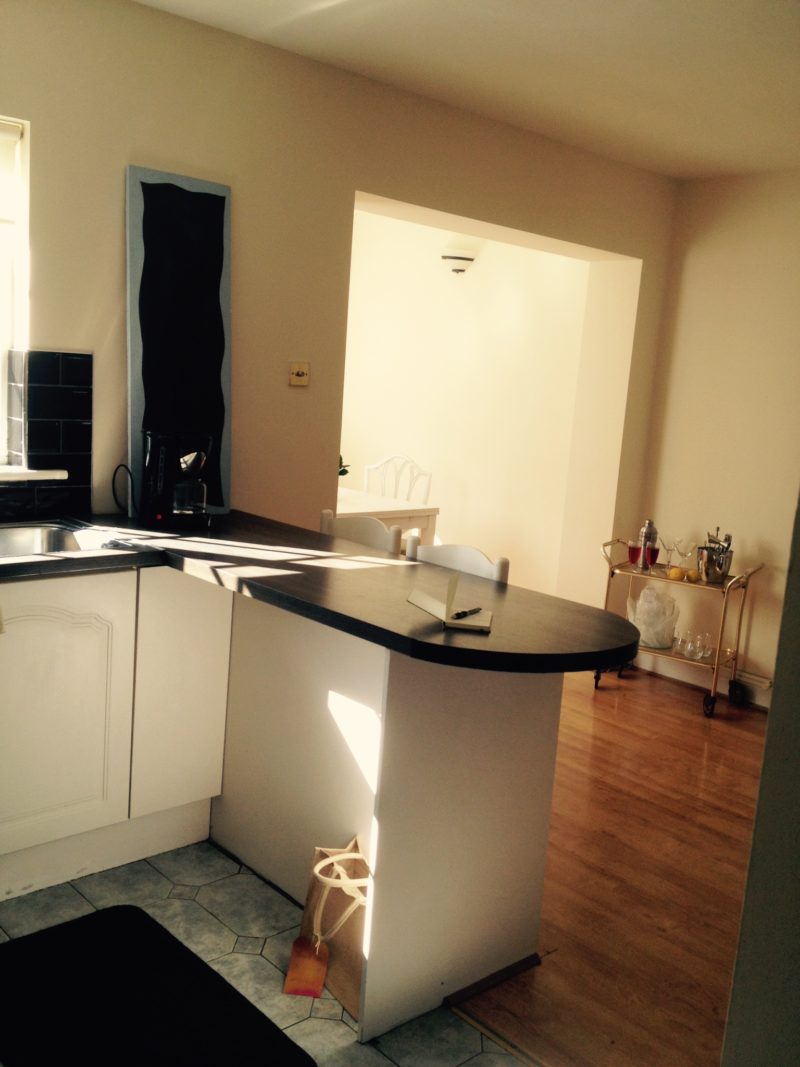 That was the dumbest peninsula/bar thingy ever. We extended it and made it way more functional with cabinets underneath. 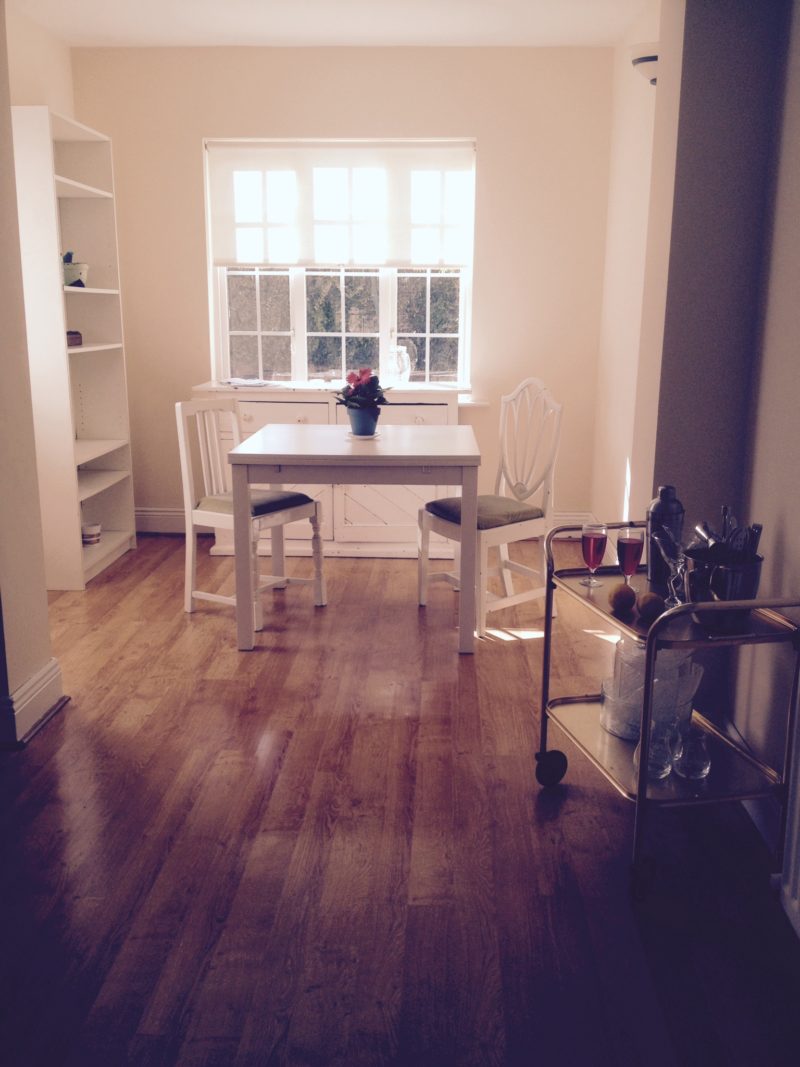 This is the little extension off the back of the house that’s now our playroom. 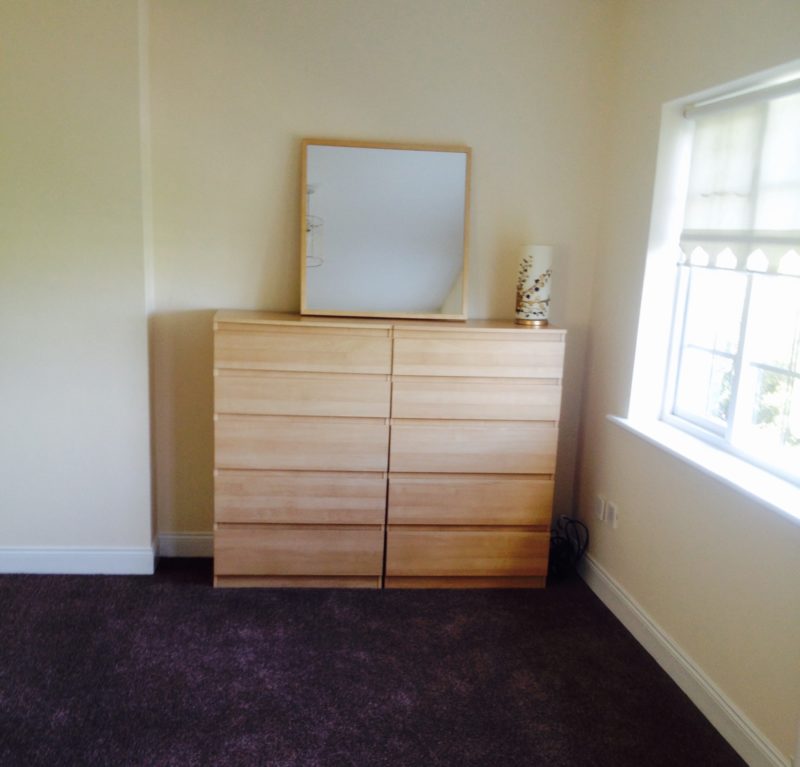 Bad, bad brown carpet in the master bedroom. All gone! 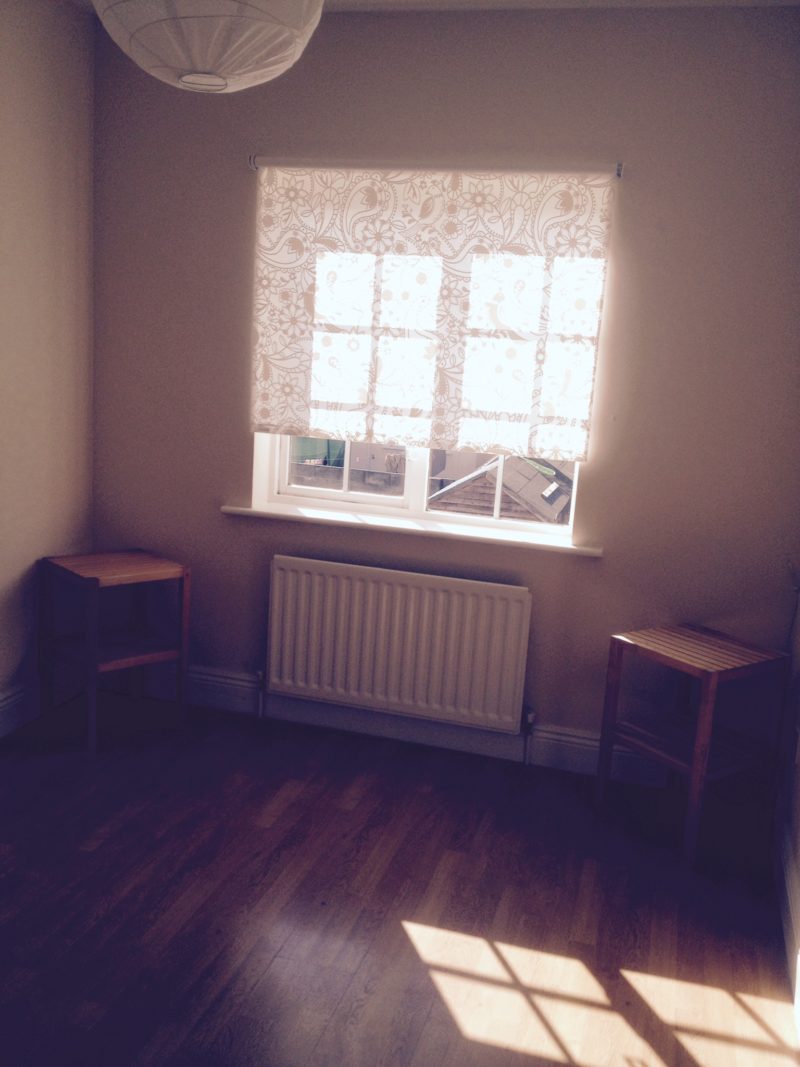 This is Noah’s room now and the only room upstairs that had the terrible laminate initially. 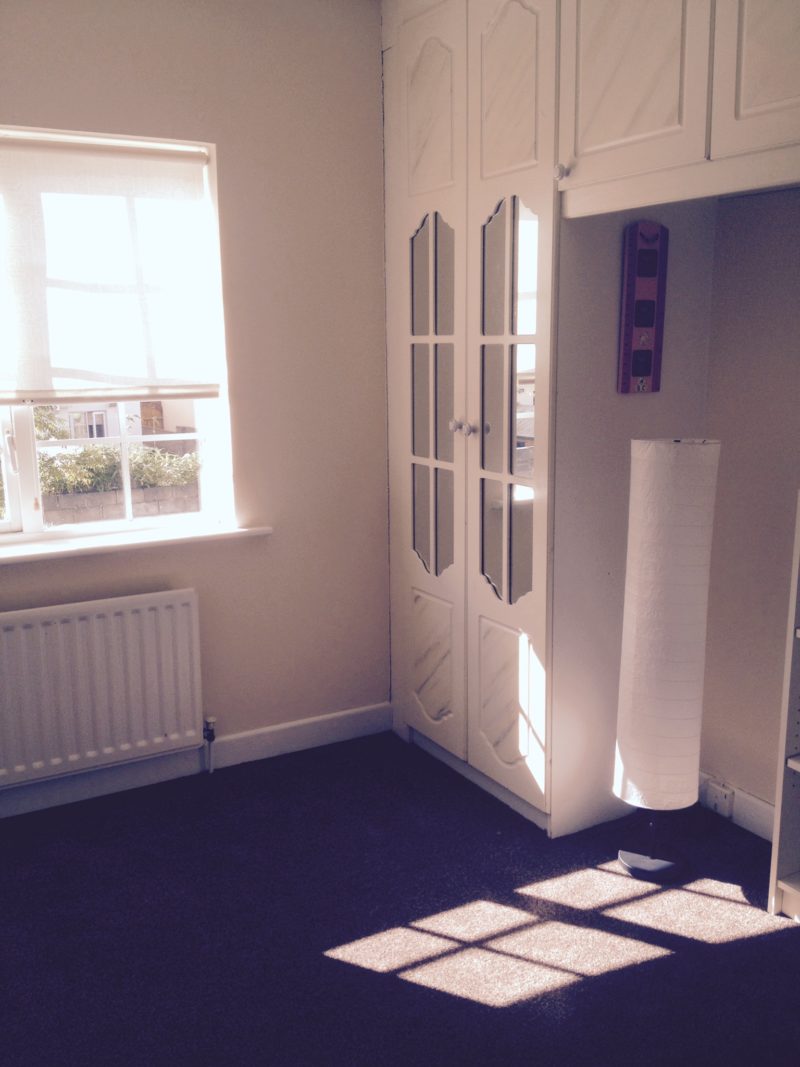 And this is Maya’s room now. Michael ripped out those built ins because she’s obviously not going to be sleeping in a double bed for a long while yet and that’s the only thing that fits in that silly space behind the cabinets. Her room is so cheery and pretty now. It’s almost complete and ready to share! 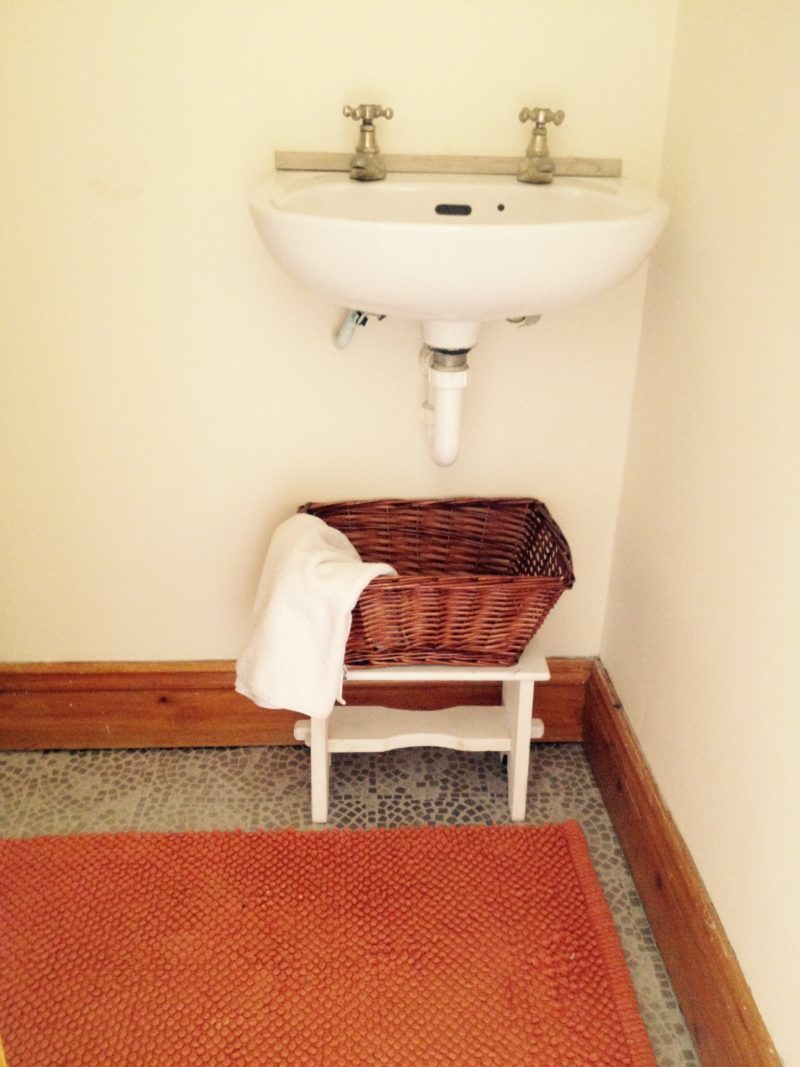 I actually didn’t mind that little tile in the downstairs bathroom, but we put in laminate like the rest of the house and I love how it all flows together. We also put in a new toilet and vanity and it’s less prison-esque now. 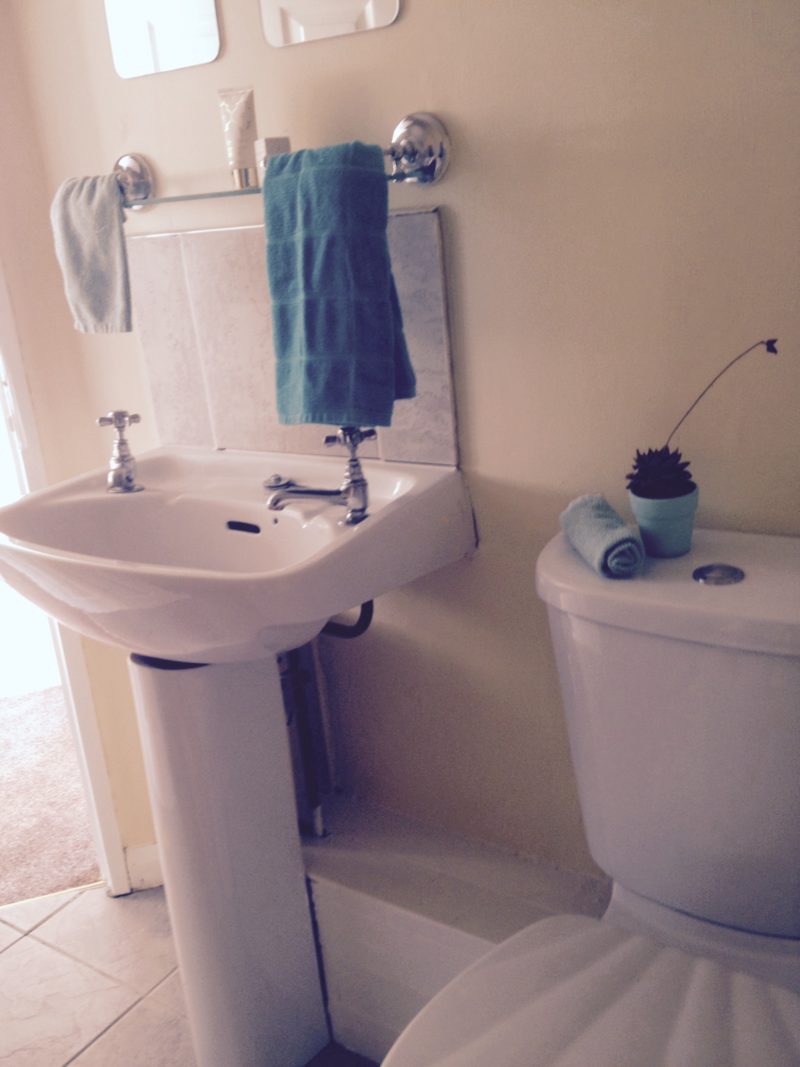 I’m still working on making the upstairs bathroom less dire. It’s our Achilles heel of the house and we just can’t afford to gut it like we’d like to yet. But I’ve got a few DIY projects that I’m hoping will help! 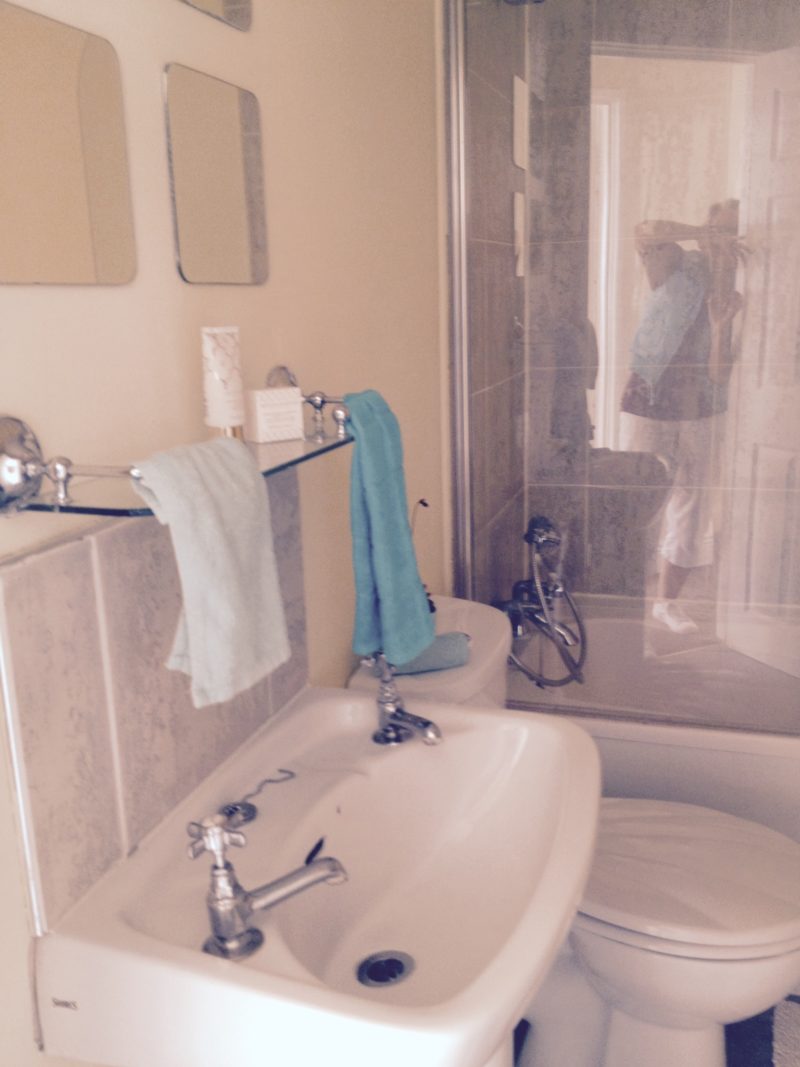 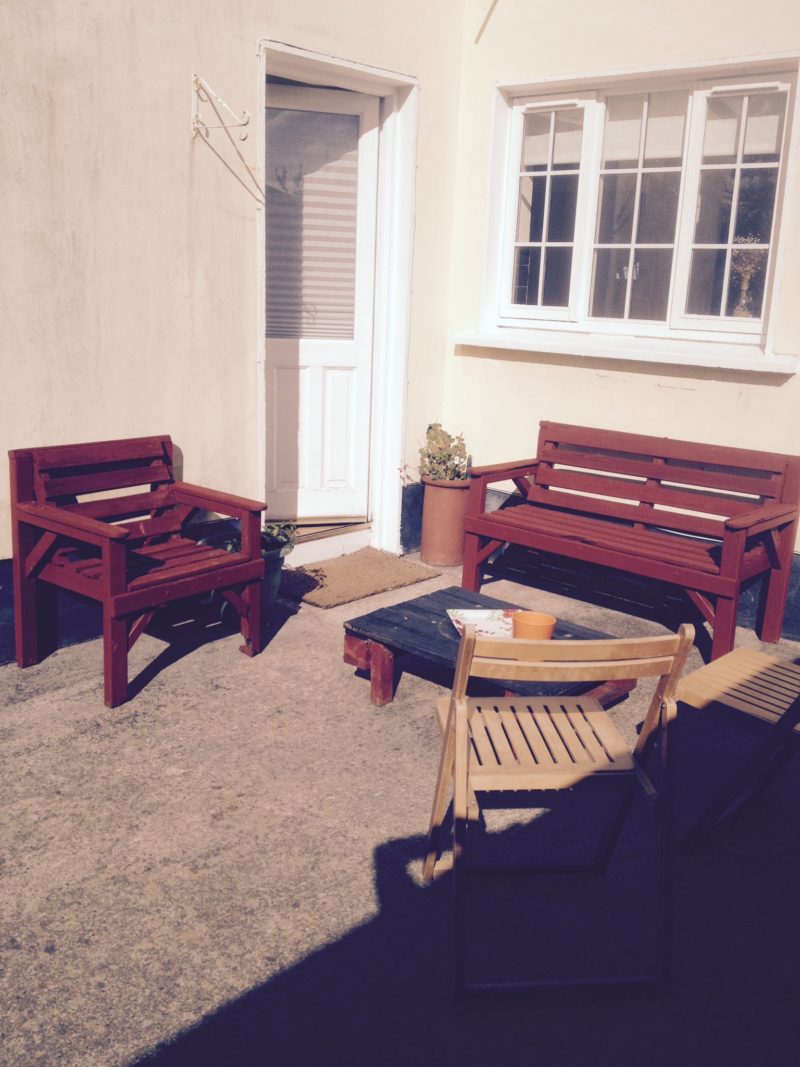 And finally, the little outdoor patio. I don’t think I have a before photo of the back garden, which is a bummer. It’s so much better already!

One last tidbit to share in this epic before post. These were the photos my mother-in-law took before she rented it the first time. They were the photos I stared at for three years in Houston whenever I remembered we owned a house and I would try to plan what it would be like to live in. It’s so wild to think we’re finally in this house and it’s so much better than I ever imagined!

Each room is now about 75% finished, but I’m hoping to finish Maya’s room to share with you this week and the kitchen next week.