Our First Trip As a Family of Four!

We spent last week in Southern California on our first trip as a family of four and it was delightful. It was so, so fun to be out in the humidity-free sunshine, visiting with family and friends for the whole week. Don’t get me wrong, it was also exhausting to have two little ones sleeping in odd places for a week, but they were generally troopers and we only had a few sleepless nights.

Right before we left, I picked up a new camera! Mine was declared dead and not worth repairing, so I gave myself an early birthday present and am very glad I had it to play with and re-learn while we were away. And then I took eleventy million photos. Here’s just a fraction. We also went to the Getty Museum and spent a few days in Santa Barbara, so I’ll share those separately. 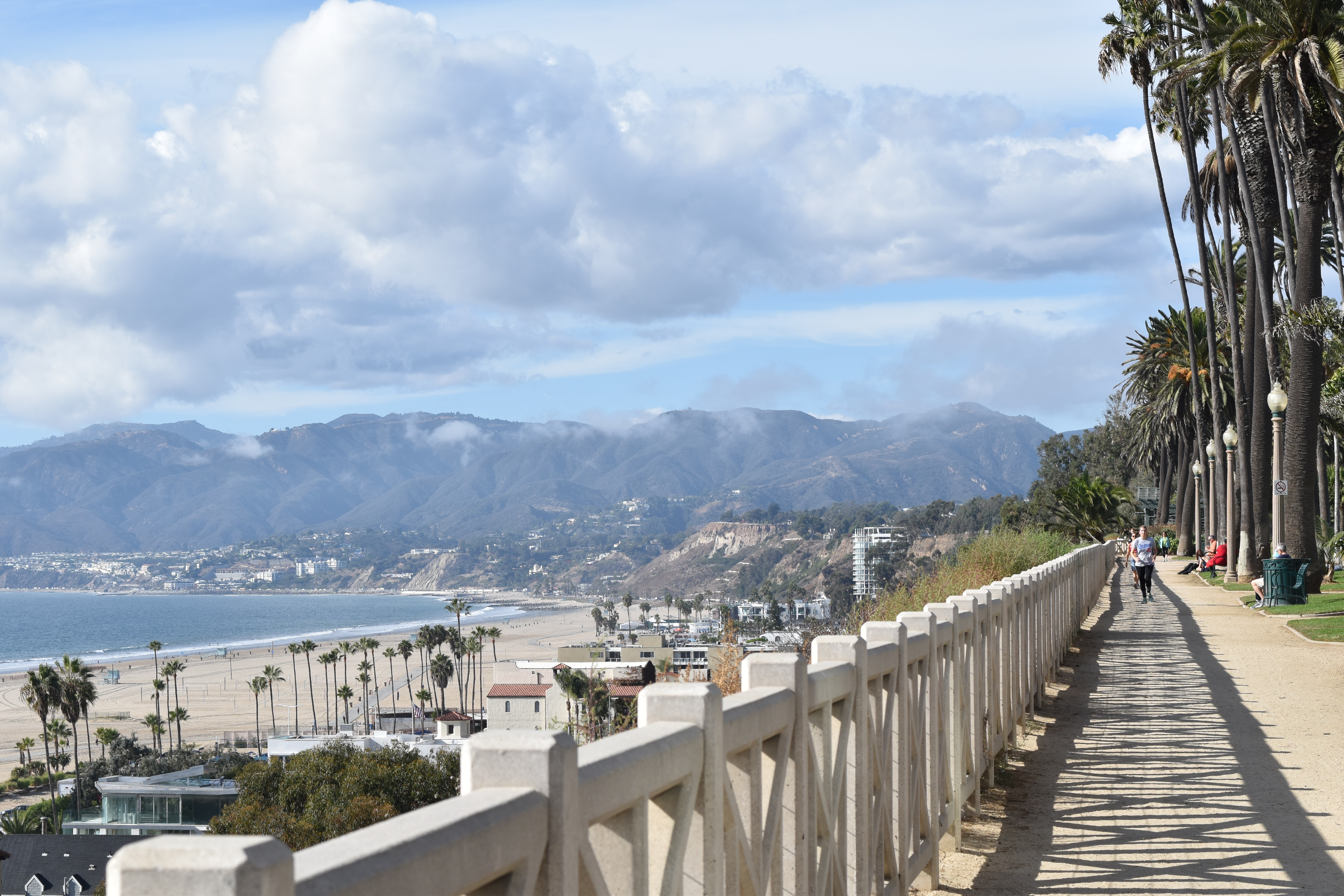 When Michael booked our Thanksgiving and Christmas travel (to LA and then we’ll go to Maine in a few weeks), he realized that it would be significantly cheaper for me to bring the kids a few days earlier than he is able to leave because of school holidays. So that meant flying with a 3 month old and a 2 year old on my own. Twice. We survived the first from Houston to LA and half the time I was cursing Michael for convincing me this was a good (or even doable) idea, and the other half I was trying to remind myself that it could be worse. Honestly, Noah was a dream (although only slept 20 minutes of the 3 hour flight because every time he fell asleep I had to bump him around because Maya needed something). Maya, on the other hand, just had trouble with the idea that she had to sit in such a big seat with a seatbelt she could easily wiggle out of. We could travel with her car seat, but I really can’t figure out how I could carry that in addition to Noah and wrangling Maya. Anyway, we survived and will do it again in another few weeks and hopefully survive again! 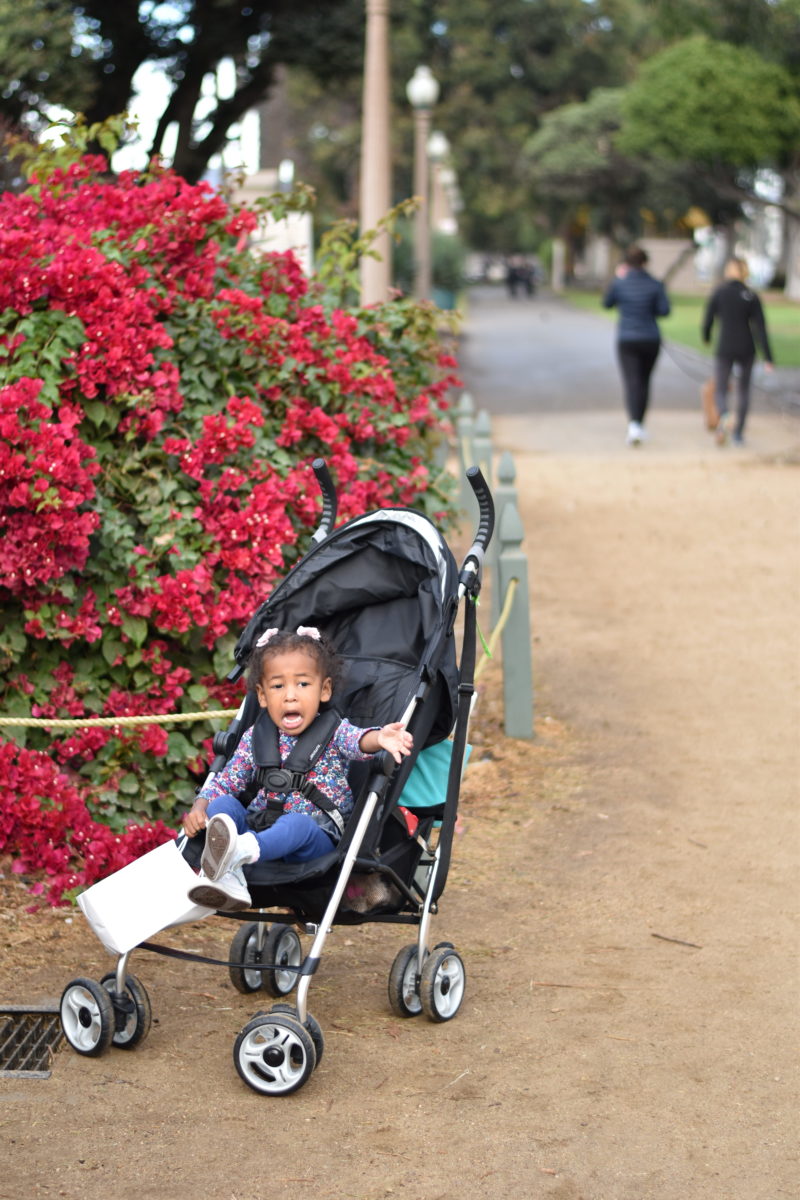 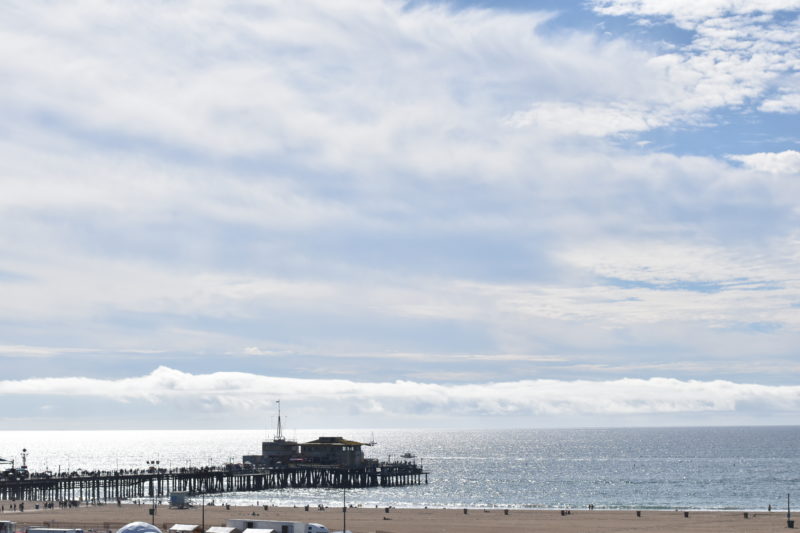 We were staying in Santa Monica, on 5th Street, where my aunt has an apartment she uses for an office. It couldn’t have been a better location and the kids and I enjoyed wandering around for the entire first day while we waited for Michael to get there. The weather was divine, bright and sunny the whole time we were there. 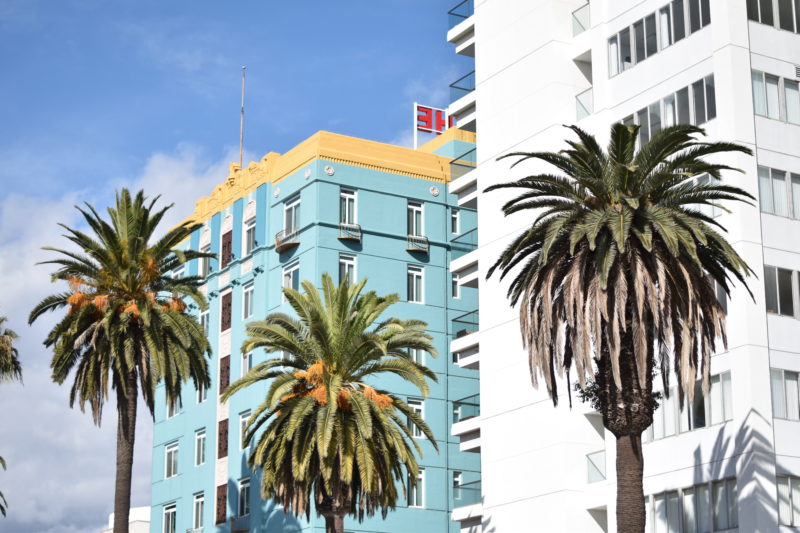 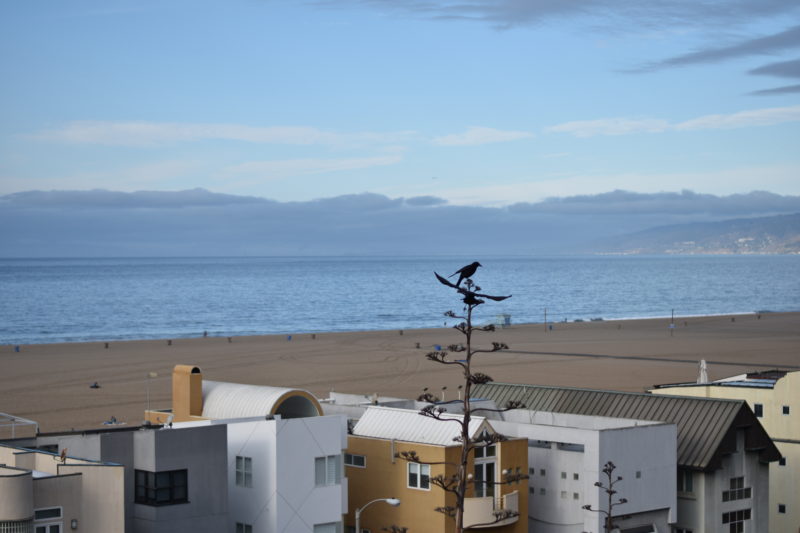 At one point, Maya finally fell asleep in the stroller and Noah needed a bottle, so we stopped at the edge of Pacific Palisades park overlooking the water and camped out for a little while. Maya made piles of the date palm droppings and Noah hung out on the grass after spitting up all over himself (standard, what a pukey guy he is!). 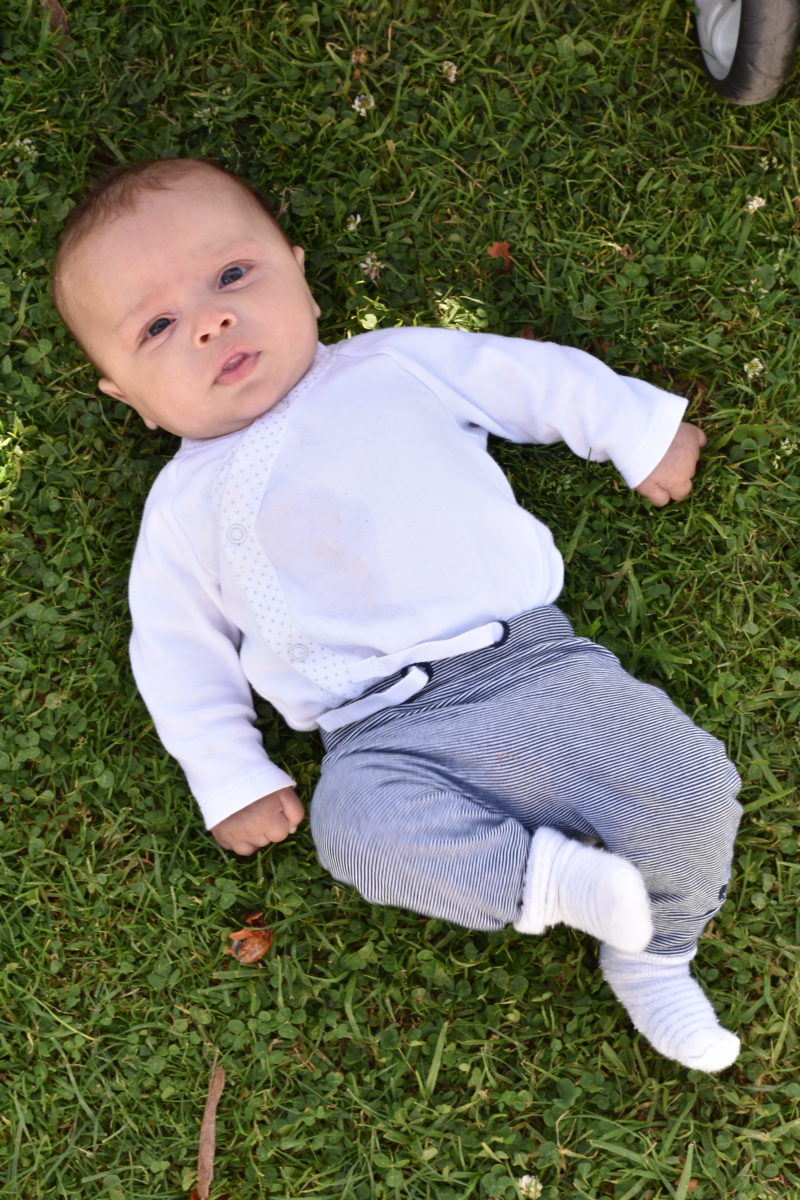 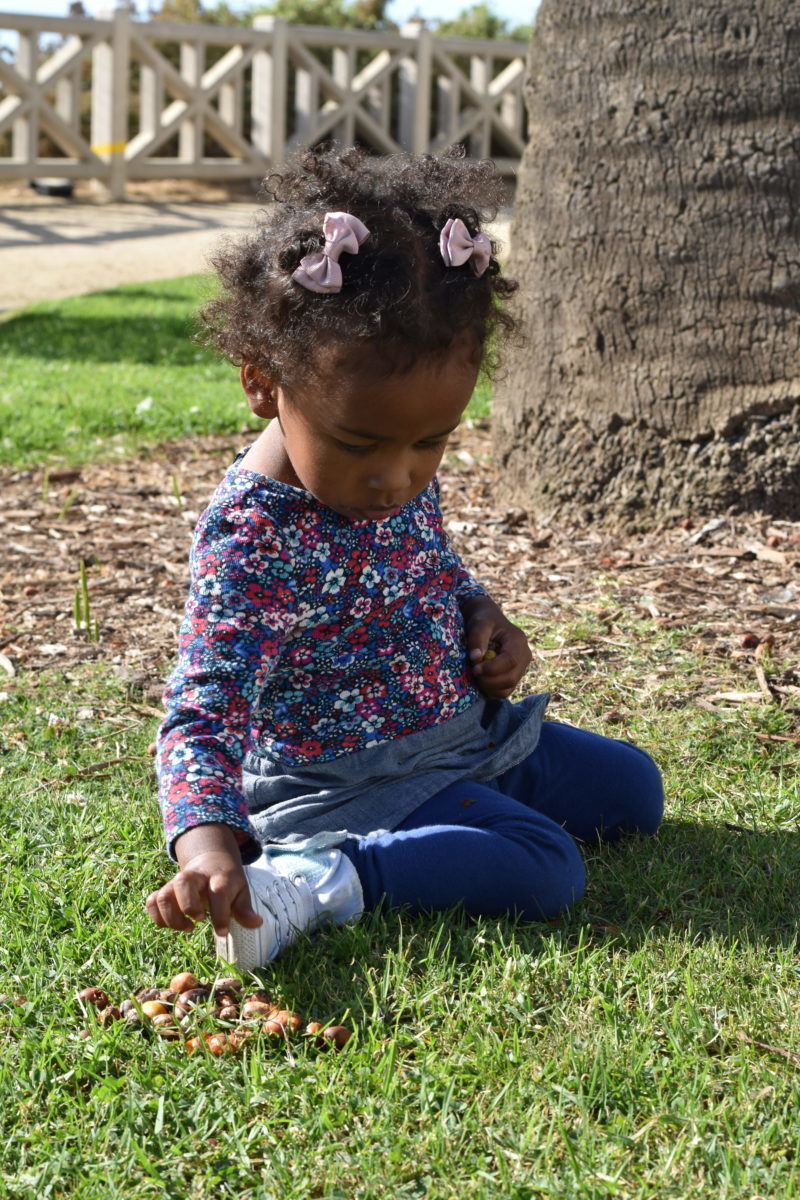 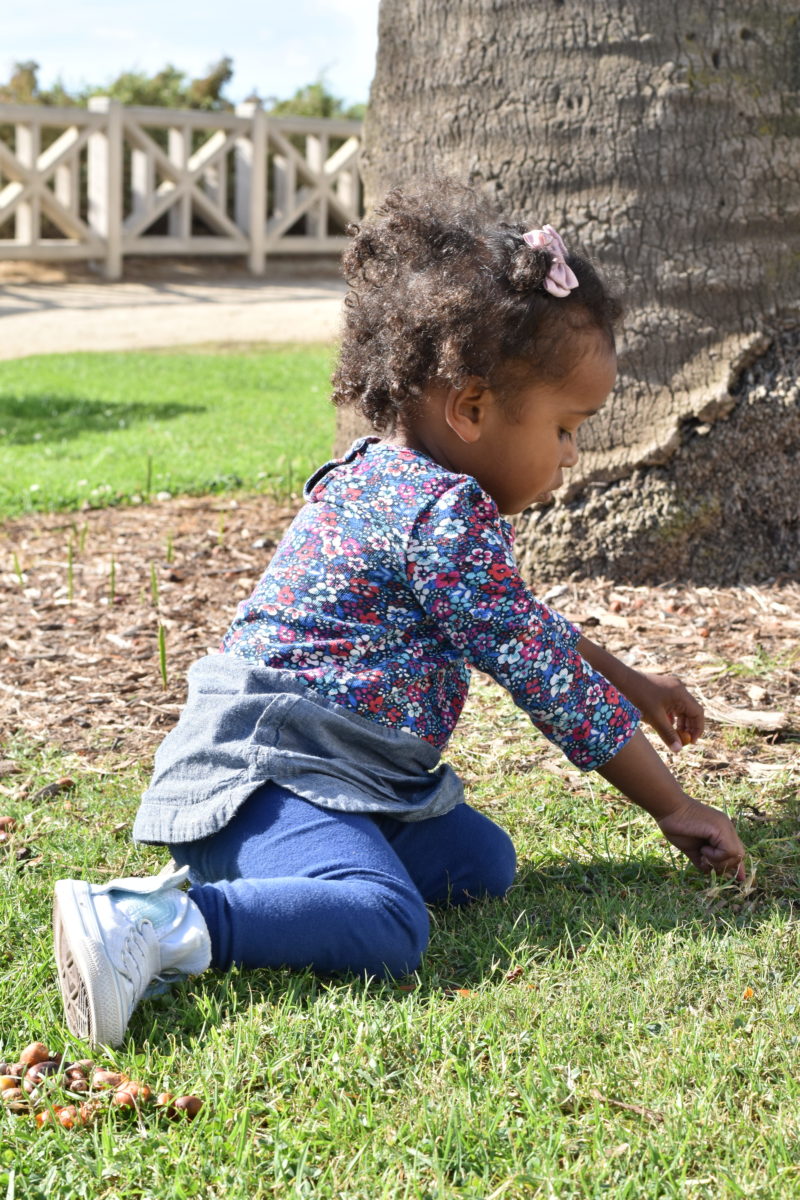 We had spent the morning at Christine Emerson Reed Park (2 blocks from where we were staying and loads of fun for Maya for several hours), so in the afternoon we decided to check out the public library to rest for a little while. Maya took her shoes off and rearranged books, and Noah sat on the couch and looked adorable. Great kids section and it was super quiet. We had the place to ourselves, thankfully! 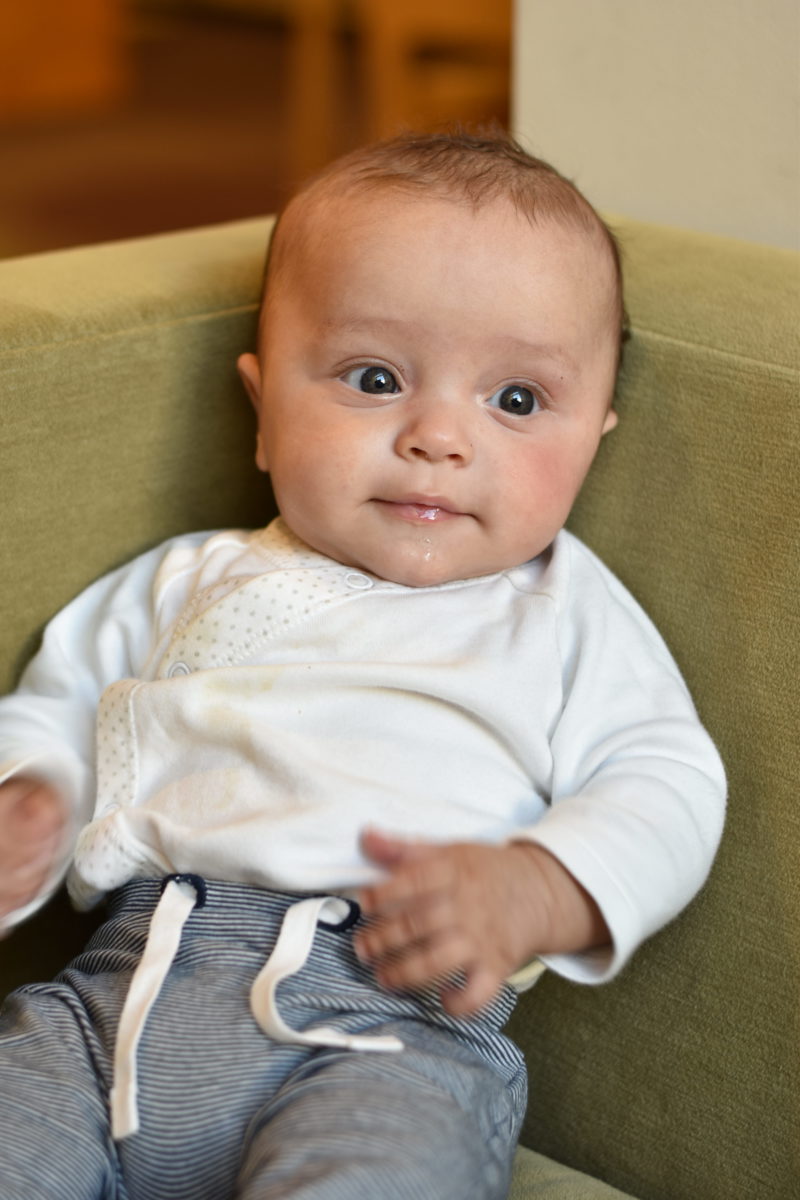 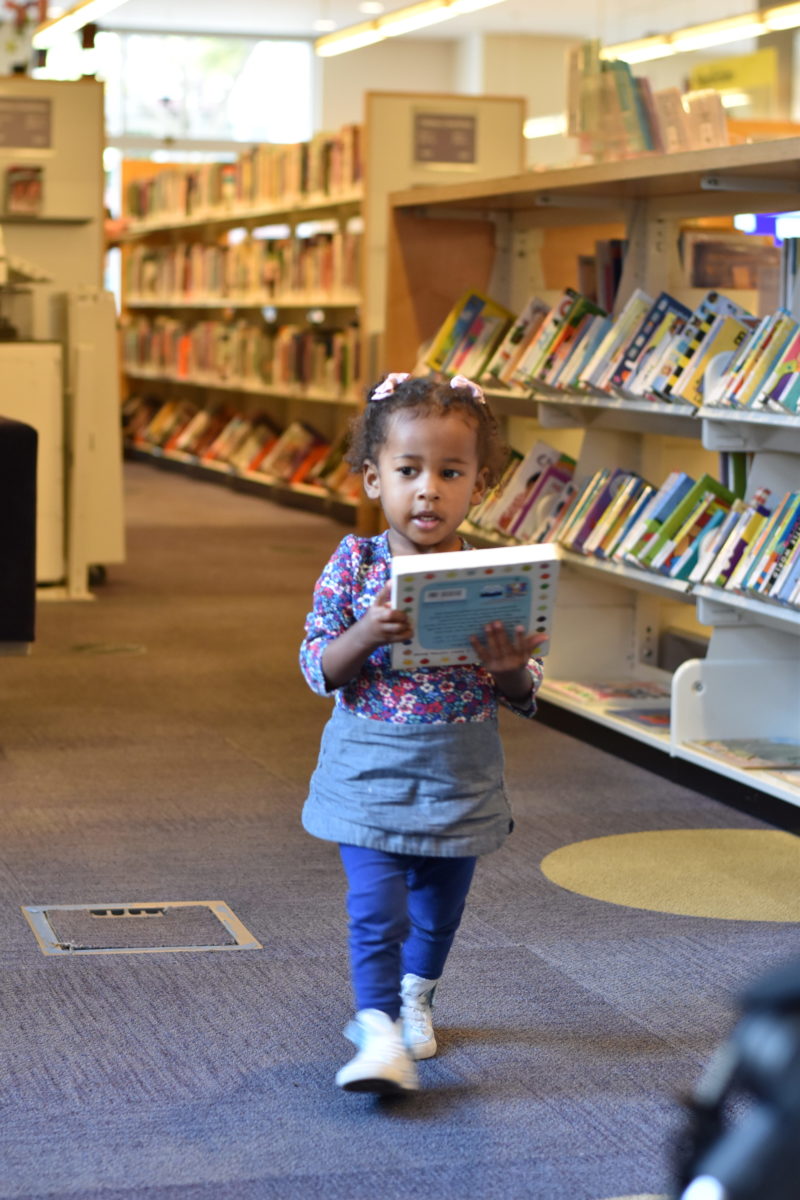 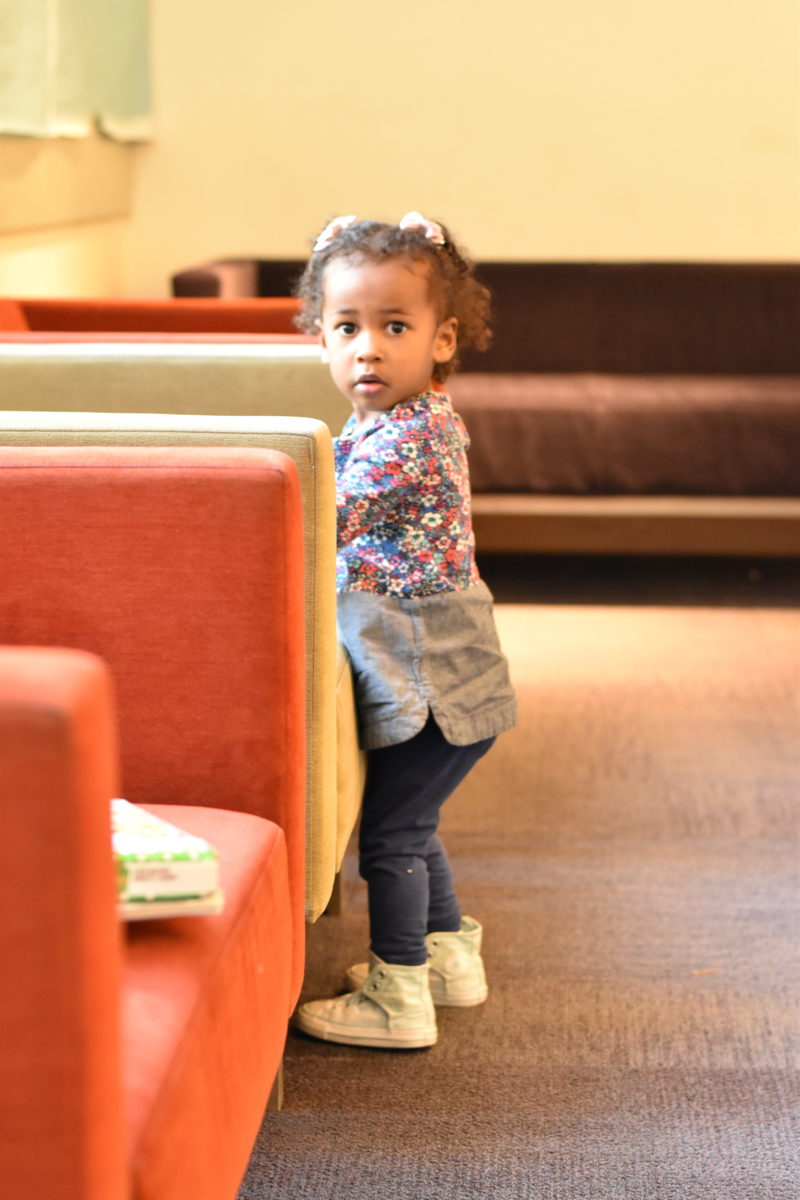 Michael arrived in the middle of the night that night, and the next morning we grabbed coffee and took him back to the park. And we repeated that sequence just about every day for our whole vacation. Win-win for parents and kids! 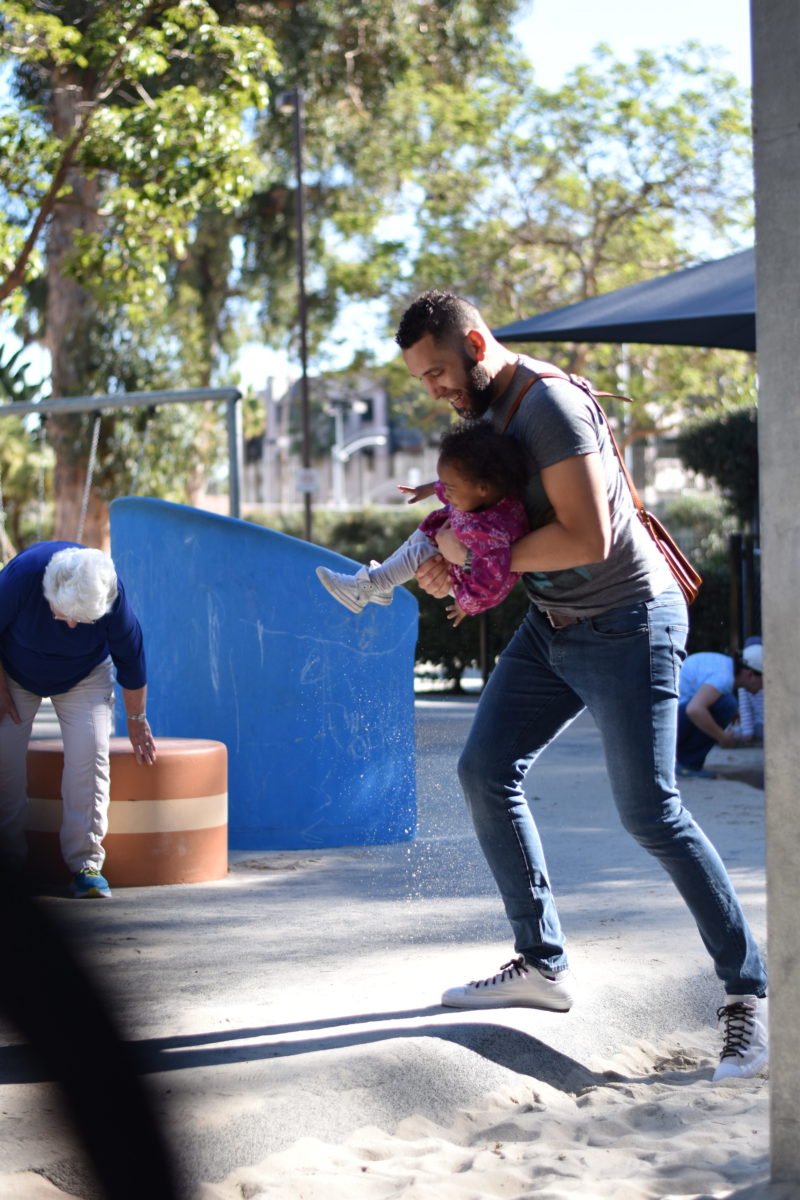 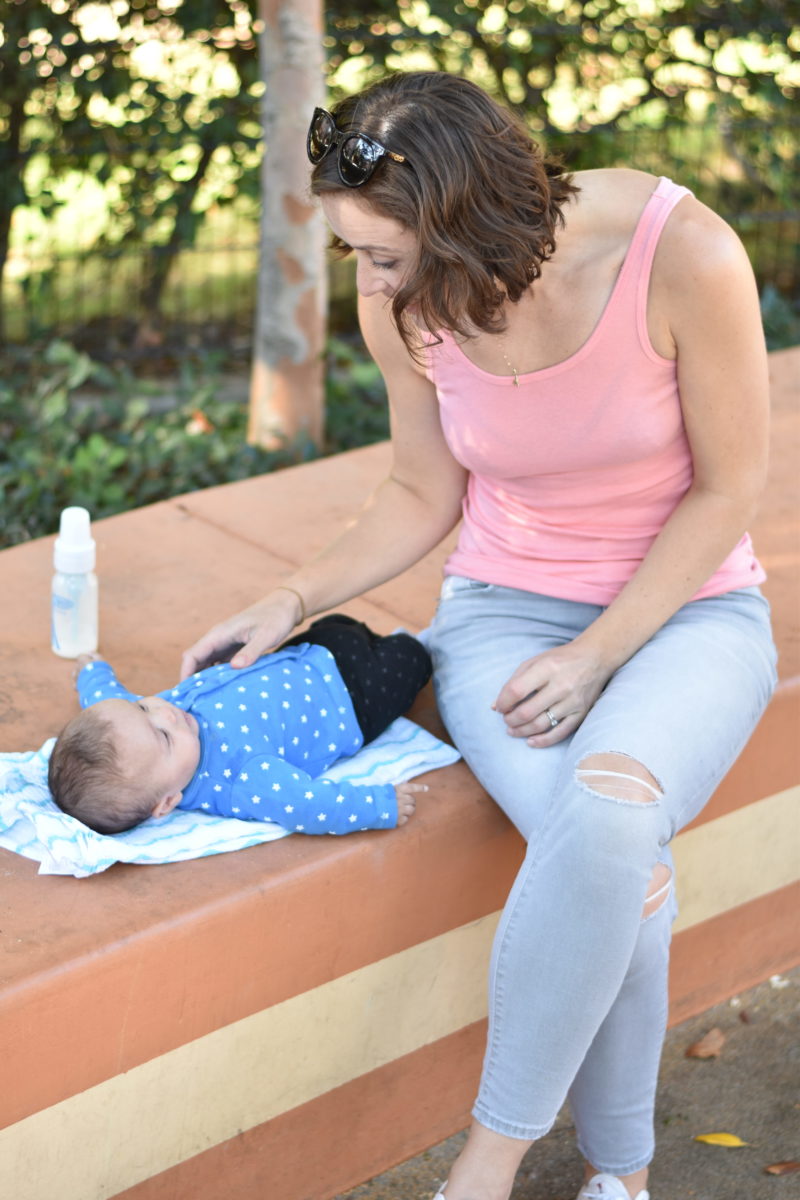 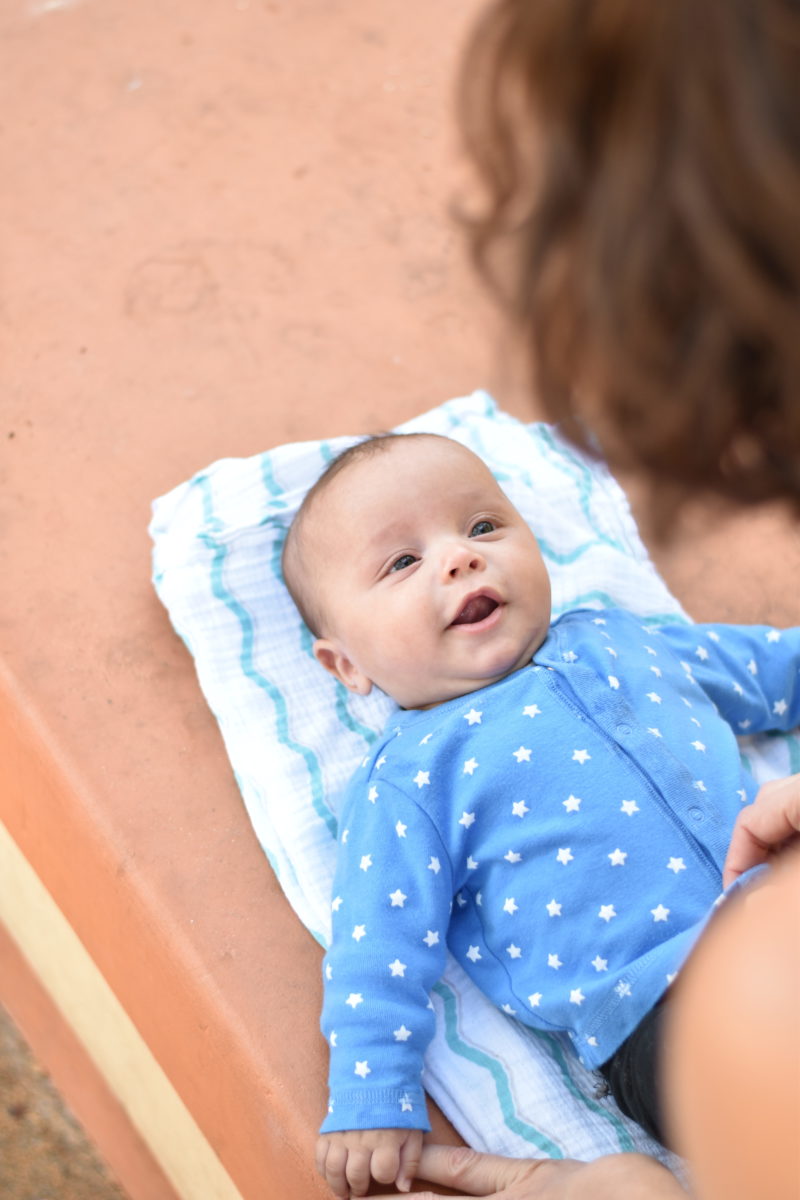 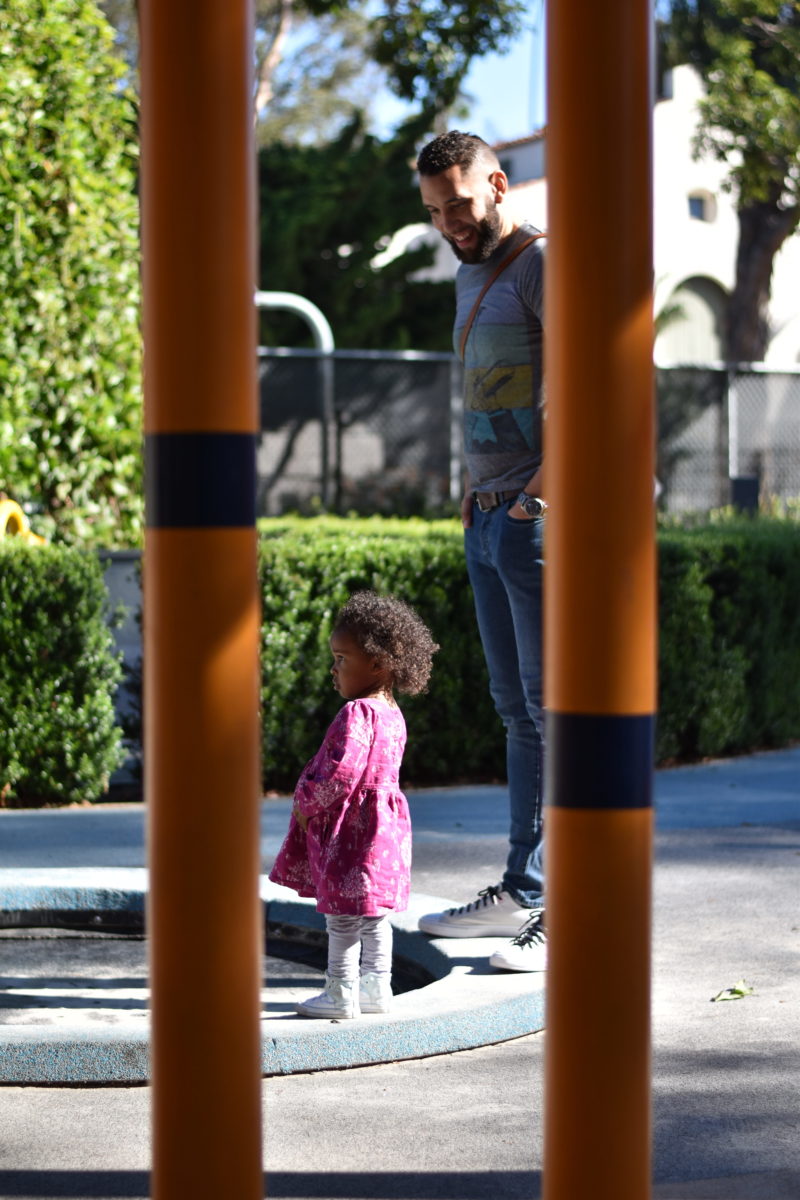 In the afternoon, we met up with my uncle and walked down the incline to the beach to dip our toes in the Pacific. It was a beautiful (if chilly) sunset on the beach. 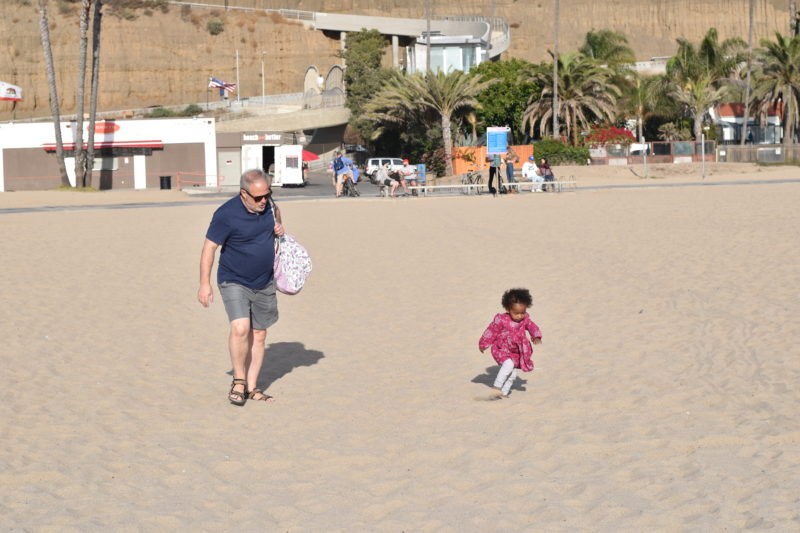 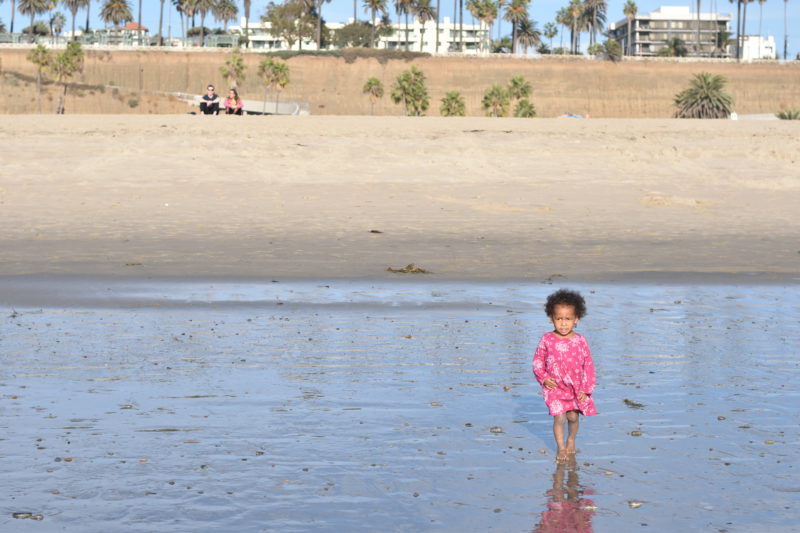 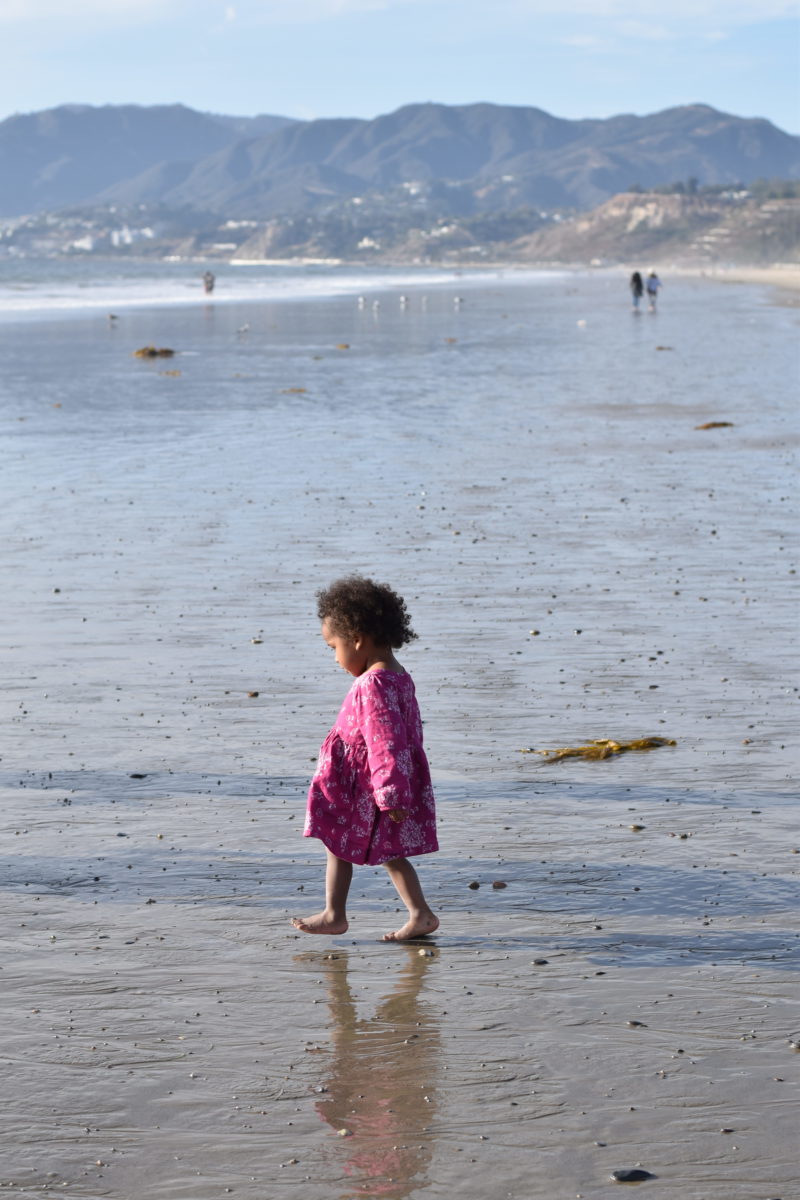 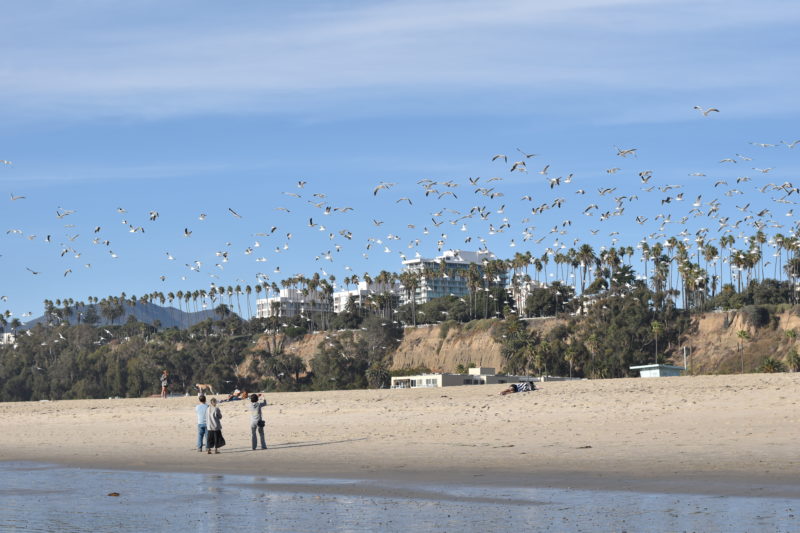 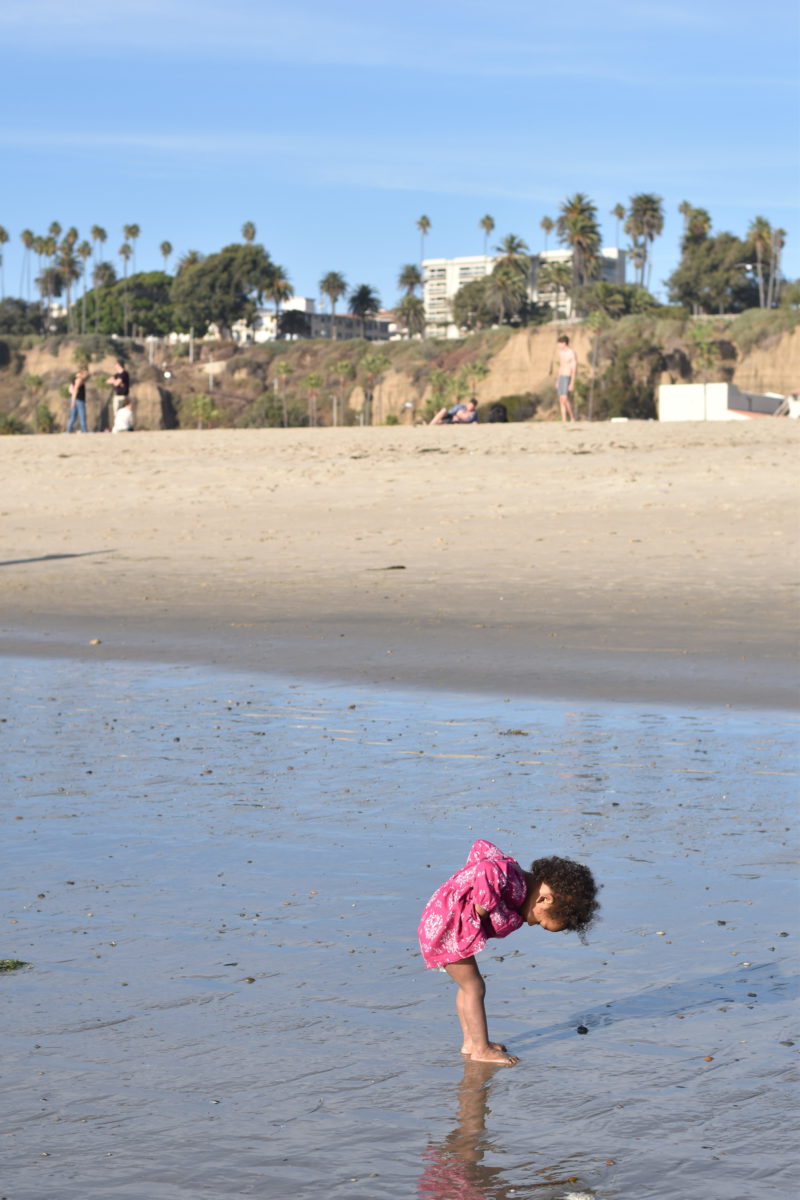 Maya wondering where her pants went 😉 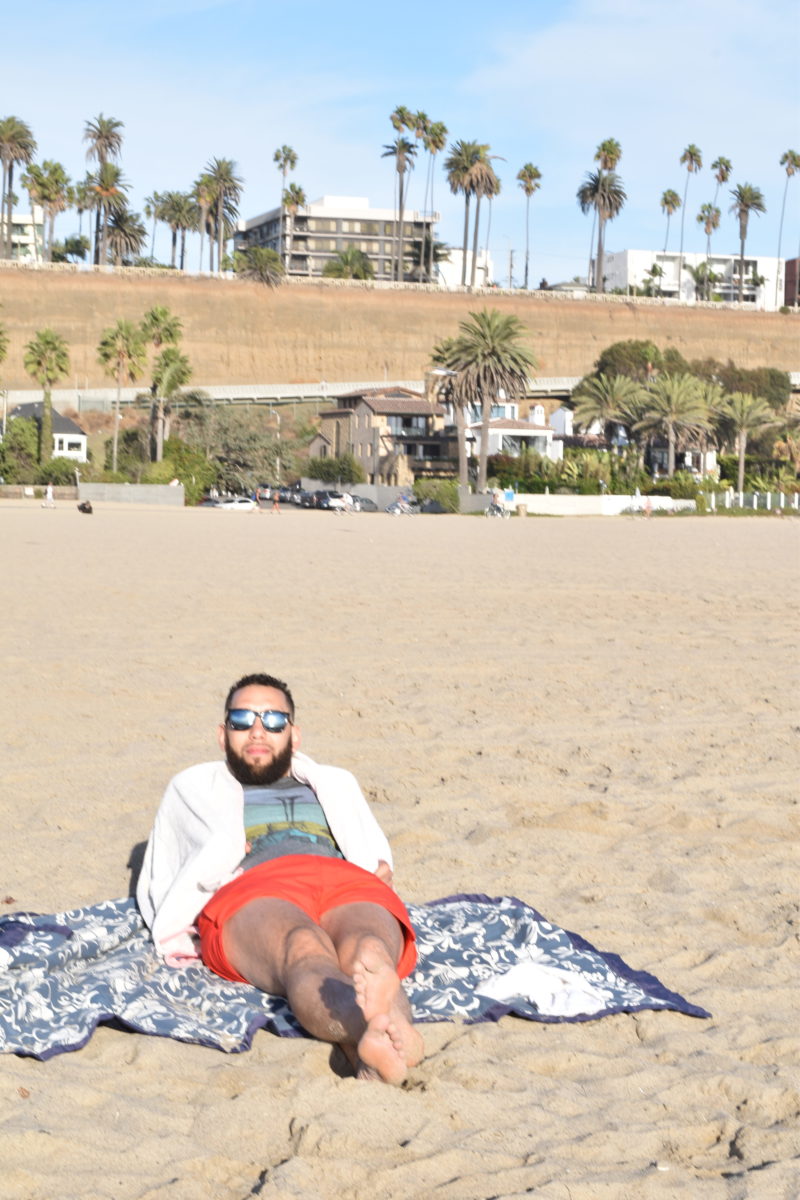 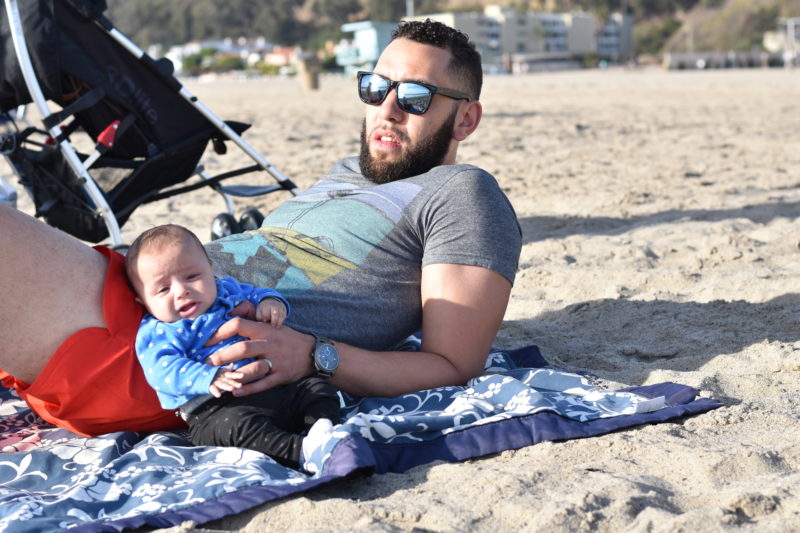 Noah wasn’t so excited about the Pacific yet. 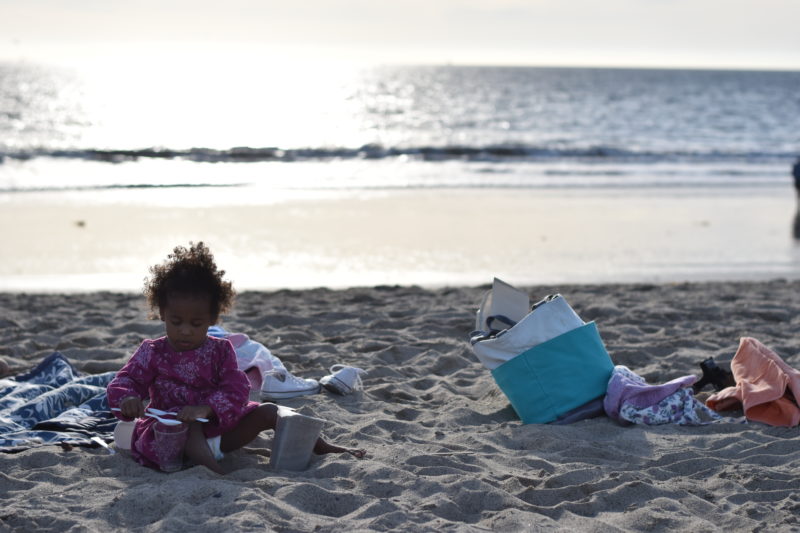 Maya loved it once we got out her cups and spoons for scooping. We had to drag her away with full sandy cups. 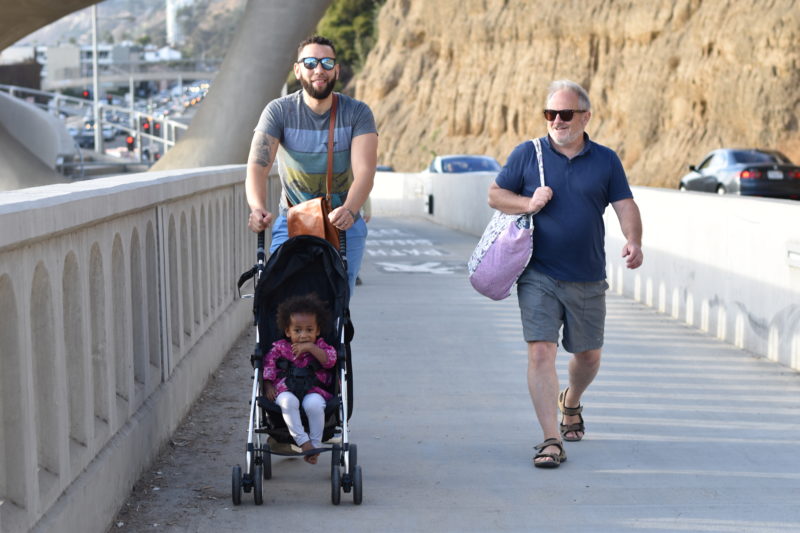 And then Michael had to push Maya back up the incline while I wore Noah. I’m not sure who got the bigger workout!