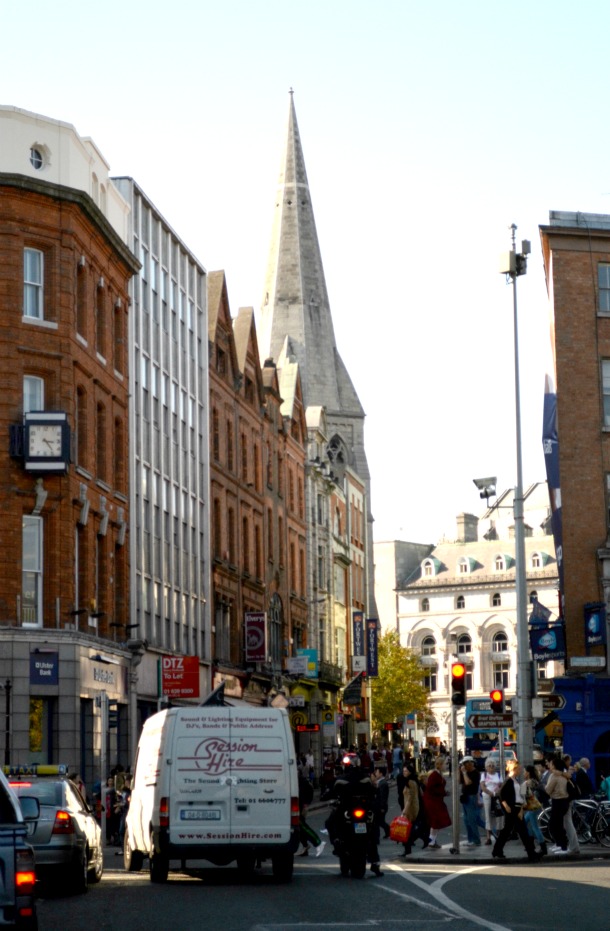 {one of my favorite streets in Dublin – looking up toward the Tourist Information Office – it’s in that church!}

This Friday marks three years since I moved to Dublin. Wild, right?!

I thought to commemorate the three years in Dublin, it might be fun to share a few stories of living in Dublin, what I’ve found challenging or surprising, and maybe even some travel tips. For today, I’ll share how I ever ended up here in the first place!

Michael (my husband, if you’re new here!) and I met at Colby College during our senior year. We dated through our senior year, and when we both graduated, Michael moved to Spain to play basketball for a year. I stayed in Maine to run a congressional primary campaign. We were apart for a year – I visited Ireland once, and Spain twice; Michael surprised me by showing up in Maine once and asked me to marry him! Then we got married in Maine in August of 2008.

Still with me? Great. At the time of our wedding, I knew I had to stay in Maine for another few months to finish the campaign I was working on. We had thought we’d try to spend one year in Europe while Michael played for another basketball team, and then settle back in America for the long term.

But by the time we got married, it had become clear that European basketball was feeling the recession already. There were very few jobs going, and it didn’t seem likely that Michael would find a team. In the weeks before our wedding, we knew we probably wouldn’t be heading back to Spain, but we were so busy we hadn’t really settled on a plan.

On the morning after our wedding, Michael and I woke up early to drive from the B&B where we spent the wedding night, back to my parents’ house to have brunch with our guests. During the twenty-five minute drive, we decided, in the fastest, most matter-of-fact way, that we’d move to Dublin for a year. We’d get our European experience, Michael could work as a basketball coach and play in a league there, and I’d find work substituting in local schools. Easy as that.

A few days after we were married, Michael hopped on a plane back to Dublin, and I stayed in Maine until the November elections. In retrospect, this was such a strange way to start our marriage – and it may have made it a tad more difficult to adjust when I moved to Dublin. But more on that later.

Michael started some coaching jobs, and set about getting our life organised for when I arrived. He rented an apartment, bought a car. I arrived at Dublin Airport at 5am on November 11th to a new country, a new husband, and a new life. It took a week for reality to set in, and it took a year for me to really adjust. And it was a whole lot harder than I ever thought it would be.

So, there’s the short story of how I came to live on this little green island. For a year (so much for that plan!). Three years later, I’m happily settled and (most days) am willing to call Dublin home.

I’ll leave you with that for today – part one of how I ended up here, with this life, in this land. Tomorrow, I’ll give you the inside scoop on what it was like during the first year.

Would you ever up and move to another country? Think you could do it permanently, or would you have to return home eventually?